Hudson County – The Hoboken Municipal Republican Committee and the Hudson County Young Republicans invite conservatives, libertarians, small-government activists, and Republicans of all types to join them at New Jersey’s premier Grassroots Activist Workshop. This workshop will teach attendees about the fundamentals of grassroots activism including best practices for building coalitions, managing organizational frameworks, and holding elected officials accountable.
On Sunday, Mach 31, from 11am–5pm, at the beautiful Barsky Gallery (49 Harrison St, Hoboken), civic-minded citizens will learn how to get involved and make a difference in local elections and government. The training will bring together people from across Hudson County and New Jersey, united in their desire to build better communication, messaging, advocacy, and leadership skills. Parking is available free of charge and lunch will be provided.
Matthew Garofalo, Chairman of the Hudson County Young Republicans said: “the Leadership Institute has a terrific and decades-long history of training tens of thousands of grassroots activists on how to have an outsized impact.” Garofalo continued “we invite everyone in Hudson County who is rightfully upset with high taxes, rising costs of living, stagnant economic growth, and the anti-employment policies of New Jersey’s Democratic political machine.”
Chris Carbine, Chairman of the Hoboken Municipal Republicans stated: “we Republicans are the party of the big tent, from secularists and atheists to religious people of Christian, Jewish, Hindu, and Muslim beliefs.” Carbine continued “we are dedicated to engaging in grassroots training - to empower all of those who are enraged by government abuse happening across NJ as well as the wallet-emptying new taxes such as the rain tax recently passed.” 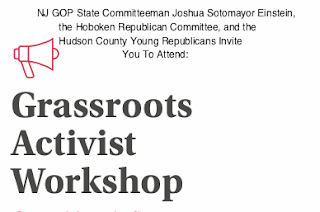