In this latest Mayor Ravi Bhalla episode of "How I sold out Reform," Hoboken begins to get the picture, literally, how the Mile Square City went from a beacon of reform to a HudCo principality.

Readers here exclusively learned weeks ago of two backroom meetings between Ravi Bhalla and North Bergen Mayor and State Senator Nick Sacco. The visible results are seen below. It's a FacePuncher HudCo lovefest!

Can you identify the FacePunchers, Ravibots and Joey the Nose in the photo taken at a Nick Sacco rally? 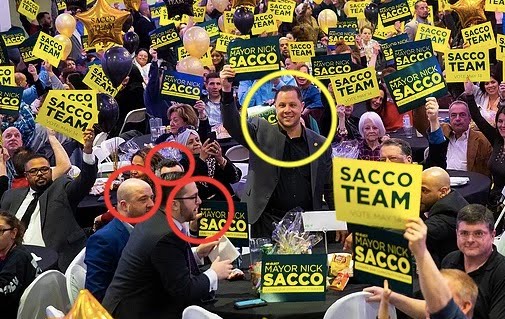 Talking Ed Note: Back with FacePuncher IDs and so much more. Someone get the bottom-feeding cavefish to a toilet. There's a whole lot of hypocrisy to puke up. That's the steady diet for Ravi's paid political operatives and campaign staff talking to each other in Sybil's Cave. Chow down!

Yellow circle: Nick Sacco senior political aide Joey Muniz who is a highly, highly paid administrator at the Hudson County School of Technology, only one of his government jobs. He collects an estimated $300,000+ annually.

Posted by SmartyJones at Wednesday, March 13, 2019