Councilwoman Tiffanie Fisher: 'The major benefits to Hoboken under the new Suez contract'

Dear friends and neighbors:
Since 1994, Hoboken has repeatedly sold its future water revenues to fill unexpected budget gaps.  But tonight, for the first time in 25 years, the City Council will be voting on a new contract with Suez that returns our water revenues to where they belong – back to Hoboken.  This is the biggest step to date towards solving our infrastructure issues which have been a top priority for me because it is a top priority of all of you. 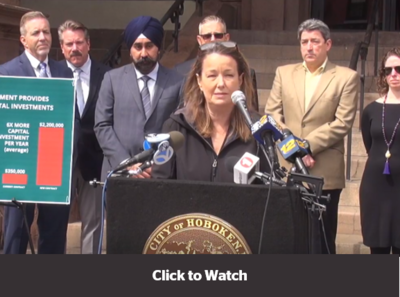 Click above to hear my remarks at Friday's press conference or here to watch my interview with Hudson County View.  If you have not yet done so, you can read the announcement from the City as well.  This agreement and new contract with Suez accomplishes so much for Hoboken:
And the best part is that all of this happens with:
How did we do this you ask?  Read on….
HOBOKEN'S WATER REVENUES BELONG TO HOBOKEN
The concept was actually quite simple.  With the mayor’s support, we got a bunch of people in a room and changed the conversation about the contract.  We discarded the notion that you had to start from our existing bad terms to try to make them better.  We instead decided that "Hoboken keeping all of its water revenues" would be the new starting point - flipping the entire structure of the contract on its head and starting from scratch:
After all, it's Hoboken’s system, it's Hoboken’s water, and Hoboken is responsible for all of the repairs and upgrades to the system.  Not Suez. 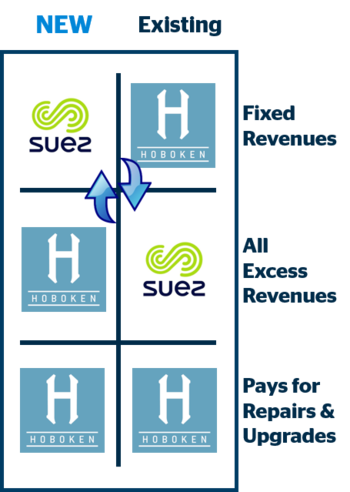 BTW, that “bunch of people in the room” included my City Council Finance and Infrastructure subcommittee that I Chair, Hoboken’s Business Administrator Stephen Marks and Director of Environmental Services Jennifer Gonzalez, our financial advisor Dennis Enright of NW Financial, our legal advisor Joe Baumann and his team at McManimon, Scotland and Baumann.  And sometimes Suez.  All of us worked collaboratively throughout this process to deliver the best outcome for Hoboken.  #MoreVoicesAreAlwaysBetter.
After making Hoboken the first priority, we moved to determine what the market cost was to run a water system like ours and who else does this other than Suez?  The Administration thoroughly researched alternatives and we were advised on what was available in the market going so far as to draft an RFP for a new water provider.  This laid the groundwork for our parallel discussions with Suez:  Hoboken wants an improved partnership and deserves a better deal, at market terms and where Hoboken’s water revenues can be used for system upgrades and repairs.
WATER REVENUES - WHO GETS WHAT?
The single most important question to me is how the water revenues generated by all of you who pay for water (directly and indirectly, everyone pays) are split between Hoboken and Suez.   Here are some figures to give you order of magnitude (all numbers are approximated):
This is the amount that ultimately gets divided between Suez and Hoboken.
Not only is how much Hoboken gets important but so is how much it leaves on the table for Suez.  For example, if Hoboken gets $1.5M, it may sound good if Suez gets $1.5M.  But how about if Suez gets $3.5M?  Then suddenly $1.5M doesn’t look that good… We needed to know who gets what.
HOBOKEN GETTING A BIGGER PIECE OF THE PIE, AND THEN SOME...
We actually did it!  Hoboken goes from receiving $350k per year under our existing contract, to $3M+ per year plus upside over time (from volume and inflation increases) in our new contract.  These higher revenues allow Hoboken to:
Here is visual to show you what getting more of the revenues looks like: 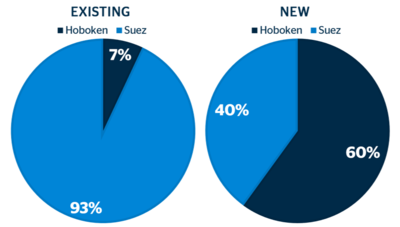 Hoboken owes Suez >$10M for costs Suez incurred since 2014 on Hoboken's behalf under the existing contract.  These included increases in bulk water rates and emergency repairs and would is addressed as follows:
WORTH FIGHTING FOR!
This is where it gets pretty technical but here is a visual of how our contract discussions have evolved: 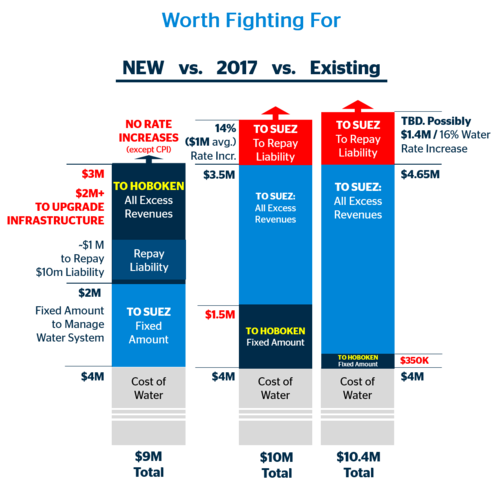 I have attached a full page pdf version as well that may be easier to read.  The dark blue box tracks Hoboken’s share (increasing), the bright blue tracks Suez's share (decreasing), and the red boxes at the top show the additional water revenues that would be needed through rate increases to address our $10M+ liability.  Our new contract has the highest revenues for Hoboken including any future upside and requires no water rate increases.
In 2017 we considered a different proposal that ultimately did not receive support of the City Council.  Although definitely a major improvement vs. our existing contract, the 2017 proposal was more of a repackaged version of prior extensions (1996 and 2001) requiring significant water rate increases to fund the benefits to Hoboken including the amounts owed to Suez and annual increases for capital with Suez still receiving most of the revenues and any future upside.   Led by my then Finance and Infrastructure Subcommittee comprised of me, Council President Giattino and Councilman Cunningham, we asked many of the questions we posed this time around, but without sufficient responses, with the previously undisclosed and mounting liability, and with a proposal that still seemed to have Suez keeping most of the revenues, we recommended to the City Council that we should try to do better for Hoboken.
Our new contract proves that we could do better and that it was worth fighting for.  Tonight I am proud to recommend that the City Council vote to approve.
Working Together For Hoboken
This has been a long time coming and something I have personally been working on for almost two years as negotiations began with Suez under the prior Administration.  I want to say that although I led the effort to get the best economic deal for Hoboken, this was 100% a team effort.  Believe it or not, most of the time the Mayor, the City Council and the Administration work great together for the benefit of Hoboken.
I would be remiss if I didn’t give a shout out to the operational improvements we are achieving as well.  It was the main focus of Director's Marks and Gonzalez to ensure Hoboken receive the best possible service and that Suez be held to the highest operational standards going forward.  In exchange, Hoboken would give more focus to the operations of our system than in the past and make minimum annual investments in our system of $1.5M which is a no brainer given our needs and now with available funding.  The signs of a true partnership.
I want to take the opportunity to thank all eight of my Council colleagues who each have been part of this process as either member of the infrastructure subcommittee over the last three years or as supporters.  Specifically, Council President Giattino who has actively helped shape all conversations along the way and Council Vice President Ramos who got all of us - including Suez - back in the room in September amidst significant angst after the series of terrible water main breaks last summer.   Also to thank Mayor Bhalla who provided the environment for us to work together and get it done.  And finally to Suez who has been willing to make significant economic changes to our agreement to benefit Hoboken and yet still be our partner for the next 15 years.
When I ran for election in 2015, one of the biggest issues I heard from residents was how our aging and failing water infrastructure was negatively affecting their quality of life.  The picture below I took on August 28th, 2015 just three days before I turned in my petitions to be on the ballot.  During my entire term as your City Council representative, I have made restoring our water infrastructure one of my biggest priorities.   This new contract is going to go a long way towards achieving this goal and I could not be more proud to help get this done working together for Hoboken. 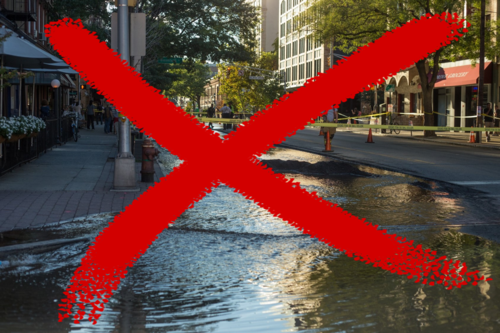