Readers: 'Ravi Bhalla polls term limits for the city council and do you read HobokenHorse.com?'

Readers have provided feedback on a telephone poll being conducted in recent days and they are unanimous on its point of origin.

It's another Ravi Bhalla political telephone poll. This one comes with an eye to the City Council ward elections in November for six of its the nine seats.


Last week, the City Council in an unprecedented action voted 8-1 in favor of a budget amendment reducing spending $836,000 and rolling back Mayor Ravi Bhalla's proposed 3% tax increase this year to just over 1%.

The only individual who is not an elected official on the list is Ravi Bhalla backer and 2014 Freeholder candidate Phil Cohen who lives in the same ward as incumbent fifth ward councilman Peter Cunningham.

No council ward incumbent is officially announced other than Councilman Mike DeFusco for the first ward. Michael Russo and Ruben Ramos are expected to seek re-election in the third and fourth wards and are not likely to face significant opposition.

Two more questions revealing the temperament of the Ravi Bhalla pollsters if not desires made the cut. "Do you favor term limits for City Council members? Should it be capped at two terms (eight years)? Would an endorsement from Ravi Bhalla make you more likely to vote for a council candidate?

Talking Ed Note: Excluding the office of mayor from term limit consideration is another sidebar tell.

Another conclusion the polled Hobokenite can draw is that even with the Reform Movement dead and buried in the 2017 mayoral campaign, Ravi Bhalla insiders wish its memory would be erased especially among council members of the fifth, sixth and second wards: Peter Cunningham, Jen Giattino and Tiffanie Fisher. 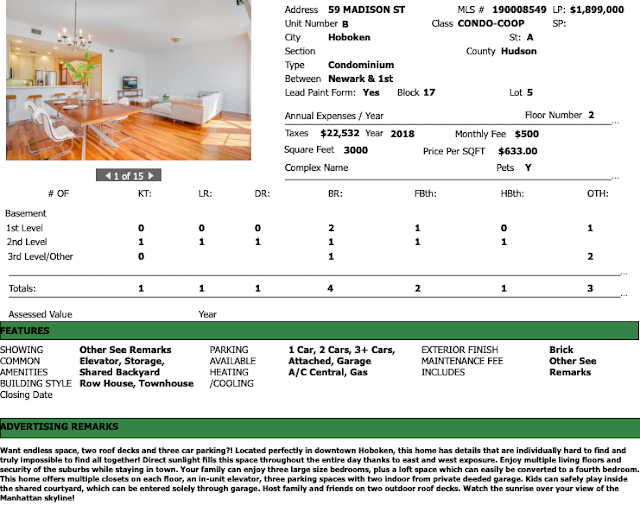 In other news, former Mayor Dawn Zimmer and her husband Stan Grossbard have placed their downtown Madison St. home on the market. The asking price for those so inclined is $1.9 million. Some rumors suggest they are downsizing but where a downsized future lies is unclear.

Zimmer had a remarkable eight and a half year run as Hoboken mayor leading the City of Hoboken into secure territory, stringently delivering flat taxes, saving the local hospital, creating open space for residents and forestalling the magnetic draw of big developers into the Mile Square City. Her leadership spearheading efforts after Hurricane Sandy was nothing short of Herculean.

The Zimmer baton pass to Ravi Bhalla, however, has been fraught with problems on almost every front. From a broken promise a month into office taking a second job with a Republican law firm to putting up an anti-Semitic bomb thrower for a major board to name but two; Ravi Bhalla is no Dawn Zimmer.

Most recently, Zimmer's Assembly choice, Assemblywoman Annette Chaparro staved off Bhalla's repeated backroom attempts to replace her with the wife of his staffer in the mayor's office against the wishes of State Senator Brian Stack.