The Hoboken Sopranos meet the House of Cards

It's happening. After years, decades and generational Hoboken voting "tradition," the time is nigh for voter fraud in the Mile Square City.

Back in 2010, Hobokenhorse.com broke the big story elevating the issue of Hoboken voter fraud across the state. In subsequent years, more exclusive stories and revelatory analysis followed but the practice although feinting and weaving did not die but morphed before completing a full 360-degree circle.

As the Jersey Journal published yesterday on NJ.com, the mechanism typically pays $50 for votes:

"Here’s how the scheme worked, according to prosecutors: operatives like Calicchio agreed to pay voters $50 if they applied for mail-in ballots and used them to vote as directed. The voters would receive the money after the election.
Prosecutors allege the 2013 operation was overseen by Raia, who has pleaded not guilty. Raia, a Democrat, was a council candidate in the city’s nonpartisan municipal race that year and supported a referendum that would have weakened rent-control laws. He and the referendum lost.
Roman Brice, who blogs at Mile Square View, posted a picture in 2013 of people lined up outside Raia’s social club the night after that year’s election. He quoted one woman who told him she had been paid to vote."
The FBI under the US Department of Justice in NJ has finally put a big dent in the arrogance of those surrounding Hoboken voter fraud. The Boys of Summer have spoken and accepted plea convictions.

The million dollar question is who Matt Calicchio, a long time political operative who worked on the payroll of former Councilwoman Beth Mason during the elections in question incriminate?

As exclusively written here in January, Councilman Michael Russo is at the 2015 Hoboken election epicenter. With the crumbs dropped yesterday, the Feds are holding back some cards before the trial of Frank "Pupie" Raia and Dio Braxton scheduled for next month.

Will they pile on springing more suspected informants at trial? 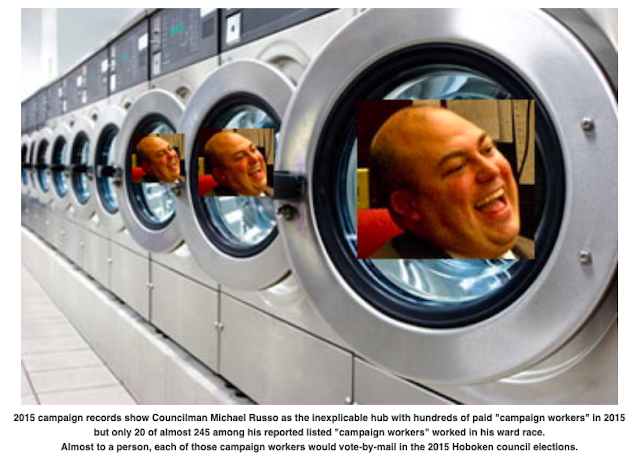 They are flat out wrong.

The rest of this story is premium content and will be released to members via email later today.
To obtain this and future stories via email sign up and donate $75 or more via Paypal: