BREAKING: One verdict for Frank Raia in his voter bribery trial: GUILTY!

The jury delivered its verdict on the second day of deliberations after requesting the testimony to review  four of the five Hoboken voters who testified how they offered their VBM (Vote by Mail ballot) to soldiers of Raia's social club in exchange for $50.

Raia, who held lifelong aspirations to be Hoboken mayor lost that bid in 2009. He returned seeking a pivotal City Council seat in 2013 and backed a ballot question limiting rent control, losing on both fronts.

He faces up to five years in federal prison and a $250,000 fine at sentencing on October 3rd.

With closing arguments Monday, the US Department of Justice repeatedly referred to the testimony of former friends of Raia as evidence corroborating with five Hoboken voters who also testified to a voter bribery scheme using the mail to perpetrate voter fraud. The references to Matt Calicchio, Michael Holmes and Freddie Frazier were called "consistent" to the allegations in the indictment against Raia.

Defense counsel Alan Zegas undermined the testimony of the three at every turn spending most of his time focusing on Matt Calicchio who he deemed not credible based on contradictions about his interviews with the FBI, grand jury and court testimony. "He's simply not credible," he concluded.

The defense added that Calicchio would benefit in his guilty plea because he wanted the government to write a letter for a reduced sentence in September. Of Holmes and Frazier, he added they both would avoid prosecution based on the government being pleased with their testimony against his client.

"Frank Raia doesn't know who is doing what," Zegas said of the campaign payments. He didn't offer how others funded the payments including over $20,000 paid to Bluewater, used mostly for voter payments of $50 per person.

Asst. US Attorney Rahul Agarwal presented a number of slides with key testimony of the three and highlighted with a slideshow how they were supported by the testimony of five Hoboken voters - all residents of the housing authority.

Referring to Michal Holmes he said, "You heard from Big Holmesy" and an order to get the paid votes, where Holmes said "Frank told us to do it."

Near the end of his closing argument, Agarwal pointed to Raia's wealth saying, "Money might matter out there but it doesn't matter here. What matters here is evidence."

The last word to the jury came from Asst. US Attorney Sean Farrell. He ripped into the defense on the payments to the paid voters saying the money could not have come from underlings of Raia who was, in fact, the underwriter.

"The money came from the defendant's PAC," Farrell indicated which is not contested.

Bluewater Operations became a contentious point as Zegas said Raia testified that it was not his idea to hire the firm to cut checks to voters but 2013 mayoral candidate Tim Occhipinti.

The defense also highlighted Raia did not give credence to his former allies and ignored their testimony as they were "lying about him." Of Matt Calicchio, Raia dismissed his campaign role saying he "worked for Beth Mason."

In the week long trial, the US Department of Justice prosecutors led by Rahul Agarwal and Sean Farrell presented almost a half dozen Hoboken voters out of the Hoboken Housing Authority paid $50 in exchange for turning over mostly unsealed Vote-by-Mail paper ballots to Raia directed underlings.

Key eyewitness testimony featured three Raia allies flipped by the government: Matt Calicchio, Michael Holmes and Freddie Frazier. Collectively, they sealed his fate as they testified to a coordinated voter bribery scheme operation focused on Hoboken's subsidized housing buildings and headquartered out of the Raia social club at 520 Jefferson St.

FBI operations specialist Jacqueline Matthews offered numerical details to the systematic targeting of Hoboken's most vulnerable population last Wednesday. She testified how more than several hundred Hoboken residents received checks for $50 from either the Raia PAC, "Let the People Decide" or Bluewater Operations.

Matthews stated a mere 15 of 378 paid VBM voters did not reside in Hoboken subsidized housing.

Judge William J. Martini who managed the trial proceedings will execute sentencing. He was nominated a US District judge by President George W. Bush and confirmed in 2002. His most high profile corruption case until the Hoboken voter bribery case was for former Newark Mayor Sharpe James.  He sentenced the former Newark mayor to a 27-month prison term for corruption.

Matt Calicchio, a years-long political operative employed by former councilwoman Beth Mason during most of his years of acknowledged illegal activities will face sentencing for his confessed participation in the voter bribery scheme in the 2013 and 2015 Hoboken elections September 12th.

Indications at trial and earlier arrests suggest the Feds are continuing to investigate the Hoboken 2015 election.

Related: The exact same pattern of voter payments and Vote by Mail ballots in Hoboken subsidized housing detailed in testimony on the 2013 Hoboken election by FBI operations specialist Jacqueline Matthews was first reported here in 2010 and the Observer.

Similarly, it's been documented in the Hoboken 2015 election: 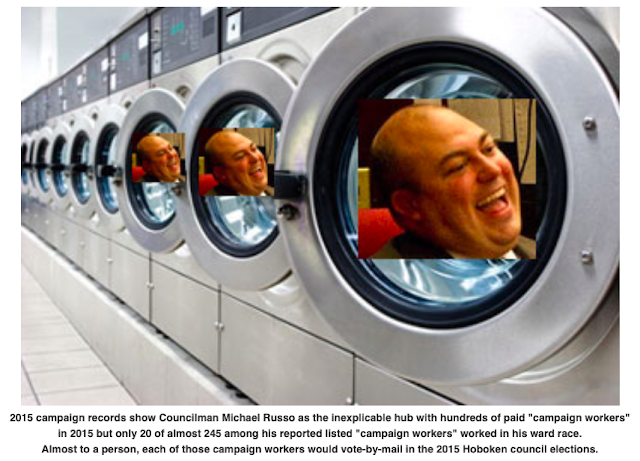