The bid barely saw quorum as the mayor's office tried to jam the measure through entering one of the biggest vacation periods of the year. It was crushed in a 5-2 no vote by the City Council.


The desperate play to jam the November election with the non-binding re: meaningless measure, is a bid to generate turn out of low information voters in tandem with the six council ward races.

It's all due to apparent recognition the more informed (Reform) Hoboken voters are not likely to be swayed by the mayor's ticket of mostly Hoboken do-nothings. Almost to a person, the mayor's council ticket consists of residents who haven't lifted a finger or a voice on any Hoboken issue of import, ever.

The realization has hit home. So the e-scooter pilot program, with over 100,000 uses to date according to one of two companies participating, was thought the means to generate a voter more inclined to vote, say, along the same manipulated lines with the Ravi Terror Flyer. (Surely, it's a coincidence.)

Councilwoman Tiffanie Fisher, the details digging policy wonk on the council was critical of the politically-inspired non-binding ordinance shooting down any delay in tweaking the pilot program. Most recently, she has pushed for drivers license verification of riders. No one under 18 is allowed to use the e-Scooters, classified as a motorized device. Hoboken police reported their first arrest last week.

"We need to be gathering information...acting today, we cannot wait until November," Fisher said. The mayor's operatives are attempting to again argue as they did against the runoff referendum, that without a non-binding e-Scooter referendum, voter fraud will impact the November election.

That argument was crushed last November when by an overwhelming margin of almost 2-1, Hoboken residents opted to bring back runoff elections. In 2017, Ravi Bhalla was elected mayor with less than 33% of the vote.

The mayor's operatives have even cynically brought back a Masonic-inspired commenter name, "Hudson Shark," aka FinBoy, morphing political operative bad behavior into a new inspiration: 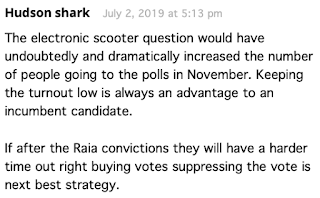 While the mayor's paid political operatives proclaim outrage the Hoboken public will not be able to express an "opinion" in November, Mayor Ravi Bhalla claimed a non-binding ordinance is "a democratic way for residents to make their voices heard."


Talking Ed Note: The City Council saw through all of it. Unlike the Ravi Terror Flyer, no one's buying.

On the let your voice be heard front, notices are out when e-Scooter users sign in with the phone app to get a ride on an e-Scooter. It informs the user that anyone under 18 using the device will see their account terminated. That's one of the biggest modifications to dissuade bad parenting, pictured above.

Sad Update: A reader shared Nancy Pincus continues multiplying her lies about the 10,000,000 hit milestone celebrated here. After presenting Alexa as a measurement that has no actual data on this site, she saw it blow up in her face as Alexa shows her website far below the rankings and ZERO time spent there. She trails by about 14 million websites behind Hobokenhorse!

Alexa shows she gets a small subset of visitors here in the teens at ZERO SECONDS! She created the grenade, pulled the pin and now she's crying it exploded in her face. She believes she's deceiving Hoboken residents or the thousands of readers here but she's only further revealing herself.

Even sadder, Nancy is trying to sell lies on t-shirts attacking council members Cunningham and DeFusco for an "emergency" meeting when they weren't even here let alone register a vote on the e-Scooter referendum scam. She's literally documenting her lies on a t-shirt because her cave site isn't enough. Pray for her.
Posted by SmartyJones at Wednesday, July 03, 2019