A gated park at the Newark and Garden streets intersection has been underutilized and inaccessible for years, but now Councilman Mike DeFusco is proposing to activate the space and give it new life by adding food and beverage kiosks. Under the current zoning plans for the property at 77 Park Avenue, the City is entitled to access the space but because of the poor condition of the park neither building residents or the public at large are utilizing it.
Councilman DeFusco has been in touch with Equity Apartments, the Chicago-based owner of the property, to discuss opening a pocket park at the location to better serve the people of Hoboken.
“Over the past two decades we have seen many new development projects come to Hoboken, but the City has continually failed to activate underutilized public spaces for community benefit,” said Councilman Mike DeFusco. “Opening a pocket park in the heart of Downtown Hoboken presents us with the unique opportunity to bring food kiosks, live entertainment and a public gathering space to our neighborhood. Through a public/private partnership like this, we can bring much a much-needed multipurpose green space to the First Ward while creating innovative ways for small businesses to expand their operations in Hoboken. I’m hopeful the property owners share in my vision and look forward to facilitating a meeting with City officials and other stakeholders to bring this plan to life.”
Councilman DeFusco is committed to maximizing placemaking initiatives in the First Ward. In the past year, he has successfully advocated for a redevelopment plan that will bring a European Market to Hoboken Terminal, passed legislation that will open the dilapidated kiosks on Pier A and pushed for a responsible public arts program. 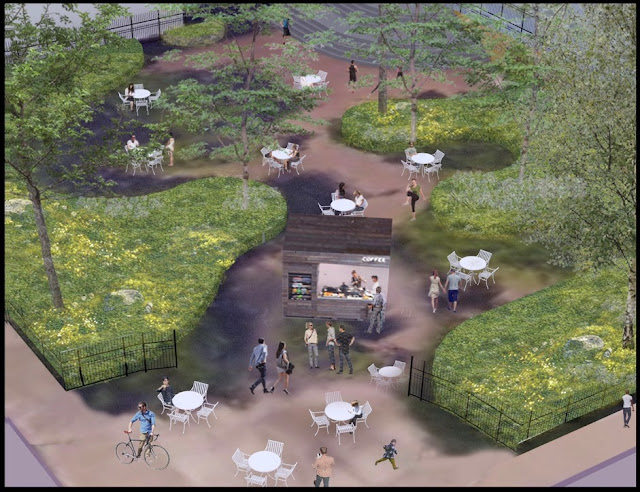 Posted by SmartyJones at Tuesday, September 10, 2019