Opponent’s Plan Could Negatively Impact Quality of Life in Neighborhood
As Chairman of both the Southern Development and Zoning Subcommittees, Councilman Mike DeFusco has successfully secured funding to conduct an engineering study to begin making necessary repairs to the Hudson Street municipal garage. Through ongoing discussions, Councilman DeFusco has already explored building a long-overdue public pool and proposed bringing a much-needed community garden to the roof of Municipal Garage D. The funding for the engineering plan was approved as part of a bond ordinance during last week’s City Council meeting.

“Repairing the municipal garage on Hudson Street is a plan the City Council has already funded as part of much-needed infrastructure investments in the First Ward,” said Councilman Mike DeFusco. “While we await the results of the engineering study, we are actively discussing with stakeholders better and more sustainable uses for the property, but we must always consider neighborhood feedback. I’m happy that my opponent, a political aide to the mayor, recognizes the progress we have made, with the cooperation of the administration, to repair the deteriorating garage. Campaign rhetoric and the business of governing the city should never mesh, but it’s nice to see my opponent support the positive change and placemaking initiatives I’ve already delivered to the First Ward.”

Renderings of the plan Councilman DeFusco has conceptualized, but not yet shared with the community for public input, including a public pool and community garden, are attached.

A competing plan to create recreation space without consulting professional recommendations nor seeking community input is irresponsible and could negatively impact the quality of life in Hoboken. Residents in the area deserve to have their voices heard about a new public courtyard space that would be built directly below their windows. Councilman DeFusco will host community meetings about the future of the garage when the results of the engineering study are received to responsibly identify how this space can be revitalized, without impacting the quality of life in the surrounding neighborhood.

“As a lifelong resident of Hoboken and mother of a 4-year-old child, maintaining and improving the quality of life in my hometown is so important to me,” said Marisol Hernandez, a resident of one of the Hudson Street buildings that will be directly impacted by construction at the garage. “It’s concerning to see plans for a recreation facility being tossed around without responsible discussions about how this new public courtyard could shine bright lights into our homes and create additional noise in our neighborhood. Having known Mike for five years, I believe in his plan because he keeps the best interests and the quality of life of all residents in mind when making big decisions like this.”

Councilman DeFusco is committed to maximizing placemaking initiatives in the First Ward. In the past year, he has successfully advocated for a redevelopment plan that will bring a European Market to Hoboken Terminal, passed legislation that will open the dilapidated kiosks on Pier A, pushed for a responsible public arts program and is looking to revitalize the pocket park at the Garden and Newark Street intersection. 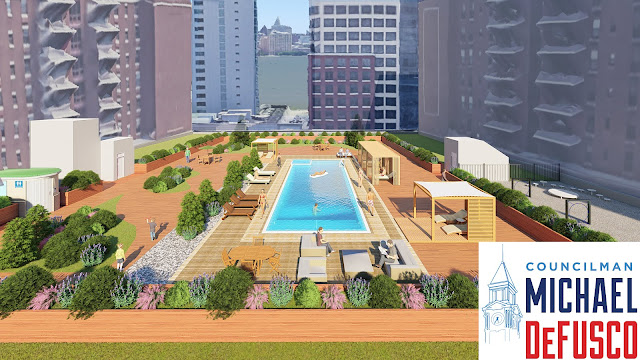 Posted by SmartyJones at Thursday, September 26, 2019