Lime on the Line

Tonight the City Council will examine additional restrictions on the very popular and widely used e-Scooters introduced in a six-month pilot by Mayor Ravi Bhalla.

It's the last of the two companies in the pilot as the mayor revoked the other, Ojo, when a reported underage or "undocumented" user rode on the sidewalk and crashed into a woman. The woman also had a baby stroller. Ravi Bhalla revoked the contract of Ojo the same day as his prerogative.

Lime is now alone facing more regulation from the City Council tonight. As of August, Lime reported the e-Scooters were a huge success in Hoboken registering over 250,000 rides.

Last week, Lime introduced its latest generation of e-Scooter with new safety enhancements featuring a larger platform, wheels and a new data screen. Further restrictions in the waterfront areas are up for a vote tonight. Lime asked users to tell the City Council their support.

Although I don't work for Lime, on occasion I've used the e-Scooters and I support Mayor Ravi Bhalla's pilot and see there's been a significant and dramatic improvement by users. Hoboken is the perfect environment for e-Scooters being a square mile.

Previously, the waterfront area, perhaps the most popular for e-Scooters has seen a significant reduction in usage. This is due to the fun factor all but eliminated with the speeds geo-controlled down more than 50% to eight miles per hour. Basically, an overweight grandmother can be seen slowly jogging past people on an e-Scooter making the rider look utterly ridiculous. They're not likely to continue riding at the increased pricing already jacked up by the City.

Complainers being what they are, parked Limes even off by a foot are described in catastrophic terms as being the end of the world. Conversations with these people are not dissimilar to talking to a Worker's Party member in Greenwich Village back in the days of the Soviet Union. Nothing you say is going to make an iota of difference to these folks including the dramatic improvements in rider behavior since the e-Scooter introduction in May.

The e-Scooter education value is ongoing and there's been a more than modest improvement by users but there's always going to be people who will pass a red light or make a bad decision as you will see on bicycles or yes, pedestrians.

The e-Scooter pilot has a couple of months left. No one should be surprised that Hoboken at the end of the six month period is the biggest success globally but removes the carbon-friendly transportation from use entirely.

The killjoy element for regulation in Hoboken is what it is. 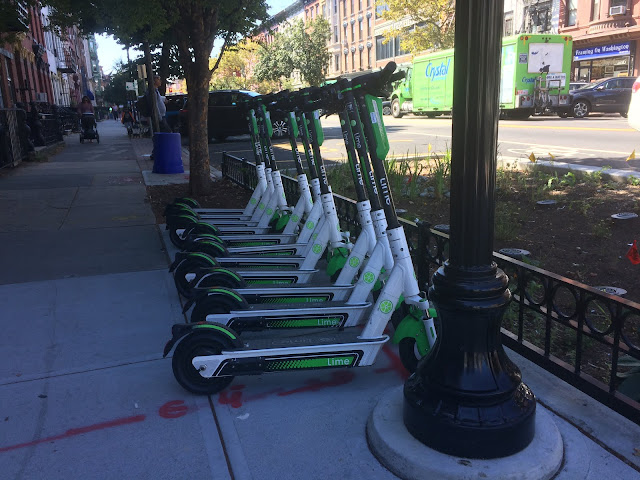 Update: The City Council Wednesday night as expected passed the additional safety measures with a 9-0 unanimous vote. Among them, the Lime e-scooters will be programmed and not be capable of working in the pedestrian walkways of the waterfront.

A resident who had their stroller hit by an underage 13-year-old illegal driver of Ojo discussed at length how the incident occurred with an Ojo e-Scooter running into her double-wide stroller and ricocheting into her leg. She asked for more safety and careful usage by e-Scooter riders recounting her unhappiness in succeeding days.

Not much discussion about the illegal driver or any penalty for a family member who set up the ride leading to the incident in the meeting. An account may have been revoked but later the vendor, Ojo saw all Hoboken service halted.
Posted by SmartyJones at Wednesday, September 18, 2019