The mayor's political stunt calling for a special meeting last night on a previously tabled resolution in the City Council last Wednesday failed.

Most of the City Council responded by simply not showing up. 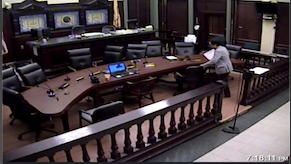 Mayor Ravi Bhalla called for the special meeting after a political campaign resolution, claiming it would "enforce" the 2011 pay-to-play ordinance was tabled for further legal review.

The resolution breathlessly talks about enforcement but does nothing of the sort.

While Russo showed last night, holding up his end of the Ravi-Russo Alliance deal where no Ravi Bhalla council candidate was put on the ballot to run against him this November; the rest of the City Council refused to play along with the charade.

The resolution, purportedly claiming to uphold "enforcement" of the 2011 pay-to-play ordinance is one Russo himself vehemently and repeatedly oppossed back to 2010.

The mesage volleyed is the City Council is serious about looking into enforcement with a conflict counsel as Mayor Ravi Bhalla went out and solicited an outside legal opinion advising to undo the 2011 ordinance.

Sources within City Hall say the political stunt was immediately undone when Rav Bhalla didn't even bother reaching out to the City Council members asking for their schedule.

Meanwhile, the 2017 Ravi Bhalla campaign spokesman who is the mouthpiece for all his council candidates sits in New England and will launch a campaign attack coordinated with online political operatives in retaliation.

Corporation Counsel Brian Aloia has stated the 2011 ordinance is unenforceable on multiple occasions going back to 2017.

Talking Ed Note: Leading into the meeting and as exclusively predicted here, local party drones controlled by Ravi Bhalla called for the public to waste its time and attend the meeting leading into the November non-partisan City Council ward elections.

Screeching like a Greta, the board member moaned he was victimized by a generic email invitation to her campaign event.

Close observers noted this, along with local party drones, were all coordinated out of the Hoboken mayor's office with some shadowy promised benefit. The Hoboken Nixle alert system was again utilized in the latest violation of its terms against usage for political activity.

Prior to the failed special meeting, Vijay Chaudhuri, the mayor's communication manager and 2017 campaign manager wrote on Facebook the City Council should attend the special meeting and "uphold" the 2011 pay to play ordinance.

The resolution however put up at last week's council meeting and the failed special meeting does no such thing.

The Dog and Pony Show thus dies a fiery but silent death.

The mayor's office was not available for immediate comment; there's more political work to do.

Posted by SmartyJones at Friday, September 27, 2019