In 2011, former mayor Dawn Zimmer pressed forward with an update to Hoboken's pay-to-play ordinance seeking to limit the amount of money from outside special interests impeding Hoboken sovereignty.

Eight years later, Mayor Ravi Bhalla and his administration are seen undermining that signature Reform legislation in the Mile Square City, one he co-authored at the time, as alleged Dark Money and City vendor conflicts emerge from the shadows in bombshell allegations.

The letter from Hoboken's small union complained about Hoboken's limitations on political contributions being far below those of the State of New Jersey claiming it was a handicap and a "potential liability" for a lawsuit.

In over eight years, there's never been any Constitutional challenge to the ordinance in Hoboken. Other municipalities of New Jersey implemented similar pay-to-play restrictions prior to Hoboken and have seen no successful legal challenge since. 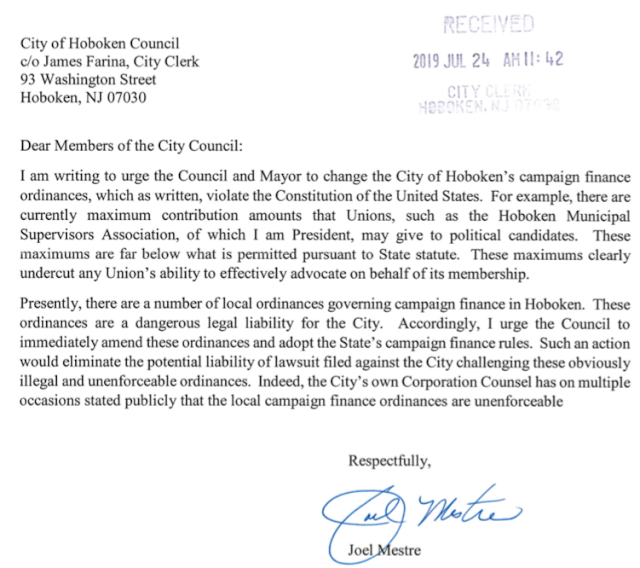 On August 1st, in a telephone interview with Mestre, he claimed to author the letter. In a discussion of the ramifications with far larger special interests outside Hoboken, Mestre asked for additional time to review the situation and promised to follow-up.

Hours later, Mestre phoned and stated, "we rescinded the letter" saying the City Council was notified in writing the Hoboken Municipal Supervisors Association was reversing course and would not be pursuing the matter.

Other sources within City Hall point to the mayor's office and a recent move with Ravi Bhalla's Chief of Staff John Allen moving into the Hoboken Law Department as prompting ongoing efforts to undo the Dawn Zimmer reform.

"It is counterproductive to a small municipal union to have Dark Money and statewide special interests invited in to push Hoboken around," said one who asked not to be named to avoid retaliation from the mayor's office.


Dark Money Alliances and a PAC to invade Hoboken?

According to that exclusive Hudson County View report, Wohlrab counts among her clients, former mayor Dawn Zimmer and Ravi Bhalla.

On September 3rd, an 18-page letter to Corporation Counsel Brian Aloia from a lawyer, Raymond Hamlin of Hunt, Hamlin, and Ridley stated it had been "tasked" to write on the constitutional basis of Hoboken's 2011 Pay-to-Play ordinance.

Hamlin's letter to Aloia concluded, "I trust this is responsive to your inquiry." (emphasis added).

In a follow-up interview by phone with Joel Mestre yesterday afternoon, he said he doesn't know Raymond Hamlin and had no involvement in having him "tasked" to prepare an 18-page letter challenging the 2011 Hoboken Pay-to-Play ordinance.

"I never got a call from this guy," Mestre stated.

Who's driving this train against Pay-to-Play?

Yesterday, Mestre reiterated he had rescinded the late July letter. On August 1st, hours after the first contact from Hobokenhorse.com, Mestre indicated a reversal, in writing, was sent to the City Clerk's Office and City Council President Jen Giattino. The letter was also received shortly thereafter by the City of Hoboken Law Department.


Why did the City of Hoboken Legal Department "task" an outside attorney to undertake a lengthy analysis and 18-page letter dismissive of Hoboken's Pay-to-Play ordinance?

In an email late yesterday to Corporation Counsel Brian Aloia, this website asked several questions with one restated below:

What role and when did the Hoboken Law Department initiate communication with them (Hunt, Hamlin and Ridley) and why?


At the time of this story's publication, there's been no response from Hoboken Corporation Counsel Brian Aloia. Back in 2017 however, Aloia, a carryover from the Zimmer Administration is seen as a $600 contributor to Ravi Bhalla's mayoral campaign. That amount is within legal limits.


Yesterday, Councilman Mike DeFusco in an interview with John Heinis, editor, and publisher of the Hudson County View launched bombshell allegations at Ravi Bhalla saying he was coordinating with a SuperPAC connected to a Hoboken insurance vendor, Fairview, to work in tandem against him and others in the November council races. Ravi Bhalla has previously announced his own council ticket.


Any coordination, however, between Ravi Bhalla, the Hoboken insurance vendor, Fairview Insurance Agency Associates in Hoboken's council elections would be illegal under NJ law.


In the interview, DeFusco was asked about his accepting excessive campaign funds in excess of the 2011 Hoboken Pay to Play Ordinance. He's previously accepted tens of thousands in excess campaign contributions in Hoboken's 2017 mayoral election and continues to do so in 2019.


The councilman up for re-election ignored the heart of the question stating more than once he would comply with the State of NJ and Federal campaign requirements. DeFusco did not indicate how he would vote should new legislation come before the City Council to undo the 2011 Hoboken Pay-to-Play ordinance.

City of Hoboken communication manager Vijay Chaudhuri has not denied the possibility of Ravi Bhalla backing new legislation dismantling the 2011 Pay-to-Play ordinance. Oddly, he references the potential involvement of the Hoboken City Council which he typically comments on almost strictly by way of attacks.

Talking Ed Note: This story is breaking.... all over the place. Hat tip to the Hudson County View for its ongoing investigative reporting contributing to this developing story.

The Hoboken 2011 Pay-to-Play ordinance was passed on July 1, 2011, with the elevation of Councilwoman Jen Giattino to office. Although threats were repeatedly made alleging its unconstitutionality by former councilwoman Beth Mason, no challenge was ever made by her or anyone else in its eight-plus years.

Former mayor Dawn Zimmer was contacted yesterday by email and asked to comment on her feelings with Ravi Bhalla seeking to undo her 2011 Pay-to-Play ordinance. She has appeared recently on Twitter complaining about pedestrian safety but does not respond to inquiries on Ravi Bhalla's actions reversing policy and legislation under her tenure.

Posted by SmartyJones at Thursday, September 12, 2019