A City Hall employee, one of four recently named for layoffs out of Mayor Ravi Bhalla's office delivered a citywide message in a public announcement on her last day.

The message announced her departure last week with a pointed and less than veiled commentary about integrity or the lack thereof coming from those in "managerial positions, positions of authority, and those who make final decisions in the City."

City Hall observers and municipal workers sources point to the less than unseemly layoffs being part and parcel of a scorched earth cynical plan constructed out of the mayor's office to blame the City Council.

That political operation, among the latest emanating out of the mayor's office, backfired when the Hoboken municipal unions refused to join the mayor's office in issuing a joint statement blaming the City Council for the four layoffs.

Three additional municipal employees were targeted for a layoff after the mayor's office seeing its budget rolled back to 2017 former mayor Dawn Zimmer levels shifted part of its payroll for several of its political aides with their double-digit raises and six-figure pay stubs over to the legal department and parking authority budgets. 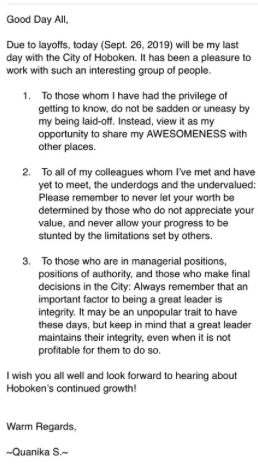 The reference in number three to managerial authority is believed by City Hall insiders a jab at Business Administrator Stephen Marks. He's thought to have drawn up the political layoff list now backfiring.

The big pointed snub though is apparently saved for Mayor Ravi Bhalla who has suffered a string of less than ethical and legal questions about his actions. "It may be an unpopular trait to have these days, but keep in mind that a great leader maintains their integrity, even when it is not profitable for them to do so," in a parting money shot.

Ravi Bhalla is well-known for his leading the Office of Mayor in numerous scorched earth campaigns, his being an eternal one as he seeks a way out out of Hoboken into higher elected office.

Apparently, one former City of Hoboken employee took notice and made a point of it at the exit ramp.

Talking Ed Note: When the City Council refused to approve Ravi Bhalla's three-percent tax increase, it offset the costs in non-essential cost reductions - none of them requiring any layoffs whatsoever.

Council VP Ruben Ramos inquired in a recent meeting if the budget funding municipal employees had been approved previously in this year's budget. City Council President Jen Giattino confirmed it was.

One of the four targeted for a layoff is a woman who is eight months away from her pension.
Posted by SmartyJones at Monday, September 30, 2019