In the second half of another unanimous vote, the Hoboken mayor now will be able to eject NY Waterway and seize the last remnant of land connected to Hoboken's industrial past on the waterfront.

Two-thousand Hoboken ferry riders among tens of thousands may begin asking themselves "now what" and also, "what is the price" to relocate an active business?

Those are not questions Ravi Bhalla is presenting as his gun is out of bullets should NJ Transit grow weary of this political dance waged for narrow Mile Square City needs. Can the dance be kept alive before November elections without NJ Transit's greater eminent domain powers stopping the music? (They may not be able to act timely, more on that later.)

The only certainty is that the gaslighting out of the mayor's office is continuing non-stop with an eye to using this for votes in November's council races.


In 2011, the Hoboken Police Department kept the stairs almost entirely clear as seen below and dozens of protestors were instructed to move to the left side of the building with some allowed on the narrowest portion of the stairs. Jake Stuiver led the protest as depicted below with HPD and some protestors visible in the background. 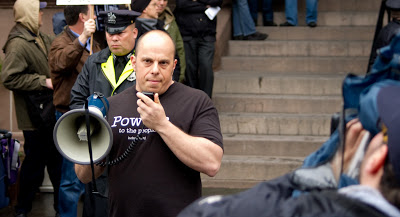 What changed?
Posted by SmartyJones at Thursday, September 05, 2019