TODAY, October 15th, there will be an IMPORTANT COMMUNITY MEETING to get your input on a revised HOBOKEN YARDS REDEVELOPMENT PLAN.

This was a very controversial plan last time around but the City Council approved it 8-1 in December 2014.  The one that was approved in 2014 was for 2.3M SQUARE FEET, and it was always expected that this project would be in phases.  One of the primary reasons was to continuously review the traffic and transportation issues with each phase.

The new proposed amendment suggests the project is now being reduced to 1.4M SF, but that is NOT ACCURATE.  What is being proposed in this amendment is two 300’+ buildings totaling 1M SF - one of the two buildings is commercial and the other is residential - and improvements to Warrington Plaza and a portion of the Terminal.  No additional buildings are planned, but the developer actually retains the option to build an additional 1.3M in the future subject to accommodating our Rebuild by Design anti-flooding project.  And quite frankly, I do not see that as a hurdle when it’s been done in NYC and other urban centers for years.  In my opinion, those buildings will be built with a favorable Administration.

So really this amendment increases the square footage of development to 2.7M SQUARE FEET, with reduced community benefits.  I’m in favor of us considering greater density at the Terminal for commercial, BUT there are no traffic studies, no economic feasibility studies and no shadow study completed.  So why would we approve this amendment and move this forward without the common protocols we take with all other large scale redevelopment projects since I’ve been in office?  The Bhalla Administration has tried to jam this down, and Councilman Russo says we should because we have been sitting on this Plan for over 12 years, and it’s time to move forward.  What?

Why does Russo and Bhalla want to move this forward?  I’ll tell you why, and I said so at the council meeting last week.  It’s about UNION money.  It’s about the UNION political contributions Mayor Bhalla expects to receive to support his council candidates.  It’s about the endorsements the Railyard Community Development Council Committee Member RUSSO has received.  When I brought up the money at the council meeting, councilmembers began to squirm.  Ms. Fisher mentioned the retaliation efforts by the Unions in voting “no” for this project.  When I made a motion to table this Plan, Fisher seconded the measure and we voted.  The vote tabled the matter in order to convene a community meeting scheduled for next week, which is tonight’s meeting.

What is interesting is that Russo voted no to table, and Jabbour abstained.  All others were in favor, and the community meeting is tonight (Tuesday).  What happened:  We know why Russo voted no.  Why?  But why did Emily Jabbour abstain?  In my 12 years, I’ve never seen a councilmember abstain on so many critical votes.  Did I give her an out when I suggested to Corporation Council that if union campaign contributions were made to Mayor Bhalla and his at-large candidates in 2017, should they be investigated to determine if a conflict exists?

Come to the Community meeting tonight and see the council committee and the Bhalla Administration defend this project with really no basis to amend other than Rebuild by Design.  Remember, no shadow studies have been conducted, no feasibility study has been completed, and no traffic studies fielded.

Please pass around and let me know if you have any questions.  I’ll be there early, but then I will attend the 5th Ward debates at Miles Square Theater by 7:30. 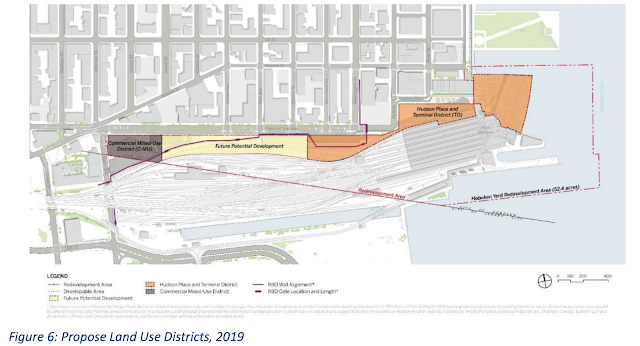 Posted by SmartyJones at Tuesday, October 15, 2019