Cristin Cricco-Powell "not a woman of her word"

After a rather sedate council forum where the Super PAC backed Ravi Bhalla candidates fled from both the big construction NJ Transit redevelopment and their boss, the most unlikely of bombs dropped.

City Council President Jen Giattino, always professional and courteous in her actions on and off the City Council had enough. She wasn't going to take the abuse dished out by turncoat friends like Ravi Bhalla, nor his surrogates. In this instance, it's Cristin Cricco-Powell doing the dirty work.

In response to attack mailers with the signed approval and photos of Cristin Cricco-Powell validating ownership, the good government advocate raised her voice in self-defense against the dirty smear tactics in the mailers deployed against her.

Pointing to a conversation they had in recent week weeks; Giattino stated Powell told her there would be no negative campaign against her and reached out to a mutual friend saying the same.


"Her mailers are negative with false accusations based on lies. This shows she's not in control of her own campaign, she's not independent, and she's not a woman of her word."

Cristin Cricco Powell would follow later and completely ditch her closing remarks as she attempted to do damage control on the exposure. She repeatedly claimed it was a policy difference, not personal.


Is Cristin Cricco-Powell telling the truth?

Here is the actual mailer with the Cristin Cricco-Powell attacks: 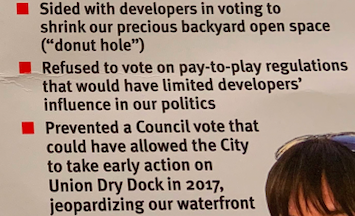 The only discussion in the City Council about the donut was a resident's petition for building stairs from their backyard area into their home. The resident was also the owner of a local popular restaurant, "Biggies."

The allegation is false. A Hoboken resident seeking permission to build stairs to enter the rear of their home from a backyard does not make them a developer let alone "developers."

Second Cristin Cricco-Powell/Ravi Bhalla allegation: "Refused" to vote on pay-to-play "that would have limited developers' influence in our politics."

The allegation is false, but also false and defamatory showing a reckless disregard for the truth to harm reputation.

The allegation can not be supported by any fact. A non-binding political resolution was put up by Ravi Bhalla repeatedly in recent weeks for the sole purpose of generating negative campaign attacks. The resolution is inert, was always non-binding and does NOTHING to limit developers' influence.

To further add fuel to the expounded falsity; it's Cristin Cricco-Powell that is backed by both Ravi Bhalla and his Stronger Foundations big construction Super PAC for the gigantic NJ Transit redevelopment.

This is a pure smear job with a Goebels bow twisted on top. Ravi Bhalla must be quite gleeful to see how willing Cristin Cricco-Powell is to lie in pushing a false and defamatory smear. Expect more of the same in the coming days from Ravi Bhalla's directed attacks out of City Hall and Dark Money's entry compounding it.

False. This is simply a regurgitated fabrication deployed by Ravi Bhalla himself from one of the dirtiest campaigns in Hoboken living memory in 2017. Some people were fooled into believing the City Council not voting quickly enough lost an opportunity to obtain Union Dry Dock by use of eminent domain. In 2017, they did vote and then undid the vote at Ravi Bhalla's request in 2018.

The impacted decision not to make any purchase of UDD was made by former mayor Dawn Zimmer. Both Tiffanie Fisher and Ravi Bhalla as council members attempted to discuss obtaining the property in 2016 with the former mayor. Dawn Zimmer would have none of it. Pressing infrastructure issues were made the priority.

The recent City Council vote on eminent domain remains outstanding. There is no surety to its outcome as NJ Transit holds stronger eminent domain rights over Hoboken. The outcome is pending. It was never jeopardized by the City Council in 2017 as Ravi Bhalla well knows.

Cristin Cricco-Powell signed off on all of this. Her ignorance may be an excuse to a limited extent on some of it. No one believes she's directing any of this or is knowledgeable about the obscure rights of an ant vs a Hoboken homeowner to build stairs into a rear backyard entrance in the donut hole.

None of the above, however, in any shape or form constitutes a "policy" difference.

It's a hit job, pure and simple. Take a bow Cristin Cricco Powell.
Ravi loves this!