Fifth ward council candidate Nick Maganuco, not of Mayor Ravi Bhalla's choosing, sees employer contacted in underhanded bid to force him out of the race.


Late July, at the infancy of the Hoboken council ward races, Nicola Maganuco made a bold Twitter announcement launching his official candidacy for the fifth ward council seat.

The exclusive story was first reported here at Hobokenhorse.com on the morning of July 26th.

Maganuco was immediately beset upon by online Ravi Bhalla political campaign operatives who mocked him. Later the same day, a dirty political trick quickly followed to his employer.

The young candidate who developed a local following with his #HobokenCommuter twitter handle had no idea his employer would receive an email the very same day questioning the appropriateness of his entry into the race.

The email depicted below with no edits of any kind, claims to come from a non-existent phony Hoboken group from a Gmail account calling itself "hobokencitizenscoalition."

The email arrived mid-afternoon to Maganuco's employer, a New York City based financial firm attempts to alert them he "announced he is running for City Council in Hoboken, NJ."

The email quickly goes for a kill-shot on Maganuco's newborn candidacy requesting if he's "received all necessary Outside Business interest approvals...?" 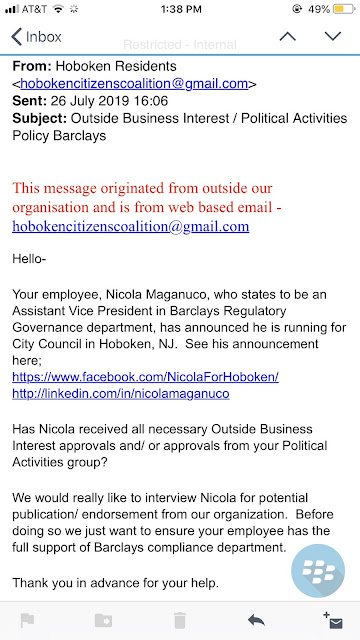 The email continues, feigning interest in interviewing the new candidate for an imaginary publication and endorsement from its shadowy enterprise of a non-existent Hoboken organization.

It ends with claimed fevered interest "we want to ensure your employee has the full support... of (the) compliance department."

At the time of the sabotage-seeking email, there was only one announced candidate for the fifth ward, the Ravi Bhalla backed Phil Cohen who recently received an endorsement from the big construction union PAC, Stronger Foundations.

Shadowy operatives sought to knock Maganuco out of the box from being a candidate the same day he announced.

Who would be behind such a dirty deed?

In 2018, political operations were reported here with exclusive analysis revealing race-baiting and other assorted attacks against council members who do not reflexively support all of Ravi Bhalla's initiatives.

There's been no response to the request for comment.

Maganuco declined to react to the email but acknowledged it was sent to his employer late July questioning the validity of his candidacy.

The Ravi Bhalla council campaign is invited to comment on this story.

Talking Ed Note: Has a familiar ring, doesn't it?

Posted by SmartyJones at Thursday, October 10, 2019