In a long, defensive email to a list collected by former Dawn Zimmer, Mayor Ravi Bhalla's makes a desperate gambit to stem the backlash from both his and his big construction PAC allies' gigantic NJ Transit plan for downtown Hoboken.

The original political plan to force the City Council to approve the Bhalla - Stronger Foundations redevelopment backfired as community activists recoiled at the attempt to shove it down their and the Hoboken public's throats without so much as a single public meeting or public notification.

In response to last week's hastily issued public meeting prior to a council meeting with the hope of a final approving vote, Ravi Bhalla and his council slate backed and endorsed by his allies, the powerful statewide construction union PAC, Stronger Foundations; the Big Lie is being deployed, desperately and repeatedly.

While pointing to excessive political contributions to Councilman Mike DeFusco, ones he badly covets for himself; Ravi Bhalla never mentions Stronger Foundations, their major contributions to himself back to 2017 and his council slate running into the many tens of thousands of dollars.

Stronger Foundations and that PAC's endorsement for almost all of his council slate in November's council elections goes completely unmentioned. Let's call this a tangible lie of omission.

The Big Lie is deployed to blame the council for his putting up the redevelopment for council approval. That doesn't happen without his approval but he wants to deceive the public into thinking he's not behind it.

That, of course, would be major news to his allies in the Stronger Foundations PAC. 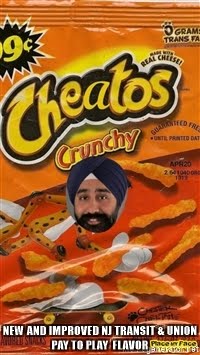 The letter starts saying he is "committed to limiting large scale overdevelopment." If Ravi Bhalla believed those choice words, why did he try to keep his NJ Transit redevelopment plan from the public?

He also has in this second release on the topic claimed credit for City Council vote being canceled last week. At the Multi-Service Center meeting, however, Director Chris Brown announced there would be a vote the following day on the redevelopment plan and was immediately countered by Councilwoman Jen Giattino who said there would absolutely not be a City Council vote the next day. The crowd applauded her response to the Bhalla Administration.

As a mayor who has repeatedly used and been admonished for illicitly using the Nixle alert system for politics and most recently, for a non-binding purely political resolution sponsored by Jim Doyle and Emily Jabbour making empty noises on the 2011 pay-to-play ordinance, why nothing on the biggest redevelopment plan in living Hoboken history?


Because this IS the Ravi Bhalla - Stronger Foundations NJ Transit Plan.

Of course, Ravi Bhalla won't admit that it was their political decision to push their huge redevelopment before the election and try to intimidate City Council members into voting an approval. But that gambit as this failed. The City Council recoiled from any vote without the public seeing an opportunity to discuss the impact.

City Council President Jen Giattino publicly inquired why there was nothing but silence out of the mayor's office with the Nixle system. Councilwoman Tiffanie Fisher noted there was nothing by way of any feasibility or traffic study on any of this.

Is the Hoboken public to believe this occurred out of the mayor's office by sheer coincidence?

Perhaps the biggest canard is the true two-stage scope of the Bhalla - Stronger Foundations NJ Transit redevelopment. The initial size is 1.4 million square feet. So at the onset, it's smaller but the second stage (unstated) is another 1.3 million square feet.

Round it up to three-million square feet as that is what friendly developer HudCo mayors do and the Bhalla - Stronger Foundations NJ Transit redevelopment plan is fully 50% larger than what former mayor Dawn Zimmer was willing to do.

This, without even getting into the details backtracking from her vision with a 28-story residential building built to the sky over 300 feet high.

At the mid-October Planning Board meeting, Ravi Bhalla showed up with the Bhalla - Stronger Foundations on its agenda.

The mayor's office thinks the Hoboken public is stupid. Their exhibition here is one of contempt.

Posted by SmartyJones at Wednesday, October 23, 2019