Yesterday afternoon, a Hackensack based political group called "New Jersey Democracy in Action" made a splashy return to the Mile Square City.

The group responsible for two 2018 mailers leading to a blowout in favor of bringing back runoff elections in Hoboken is funded by unknown contributors and has Mayor Ravi Bhalla and his supporters seeing red.

Dark Money efforts first appeared in the fifth ward against council candidate Nick Maganucco when a phony Hoboken group contacted his job last summer asking if he had received permission to run.

To the further consternation of the Ravi Bhalla council slate, an unconventional campaign mailer arrived late yesterday to fifth ward residents critical of Phil Cohen for big development ties but not endorsing either of his two opposition candidates.

Is it retaliation against Ravi Bhalla by his foes in Hudson County or might it be related to the hit job to council candidate Nick Maganuco and the clear attempt to force him out of the fifth ward council race when he was the sole opposition?

In 2017, Ravi Bhalla won election to mayor with less than 33% of the vote. His scorched earth style election campaigning and post-election politics now feature his council slate's false and defamatory campaign mailers bringing back memories of the Ravi Terror Flyer, which celebrated its two-year anniversary yesterday. 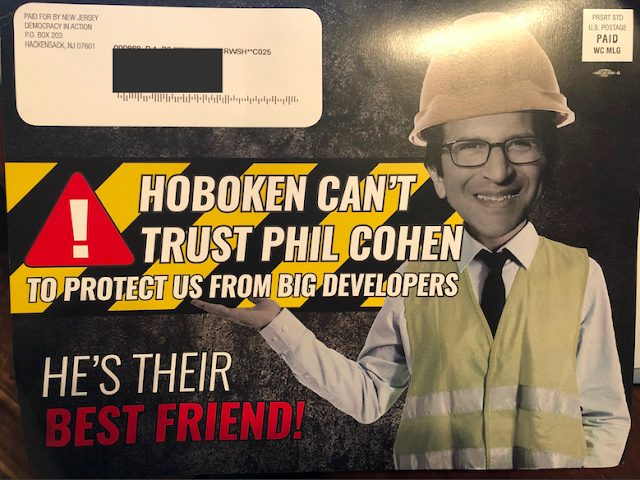 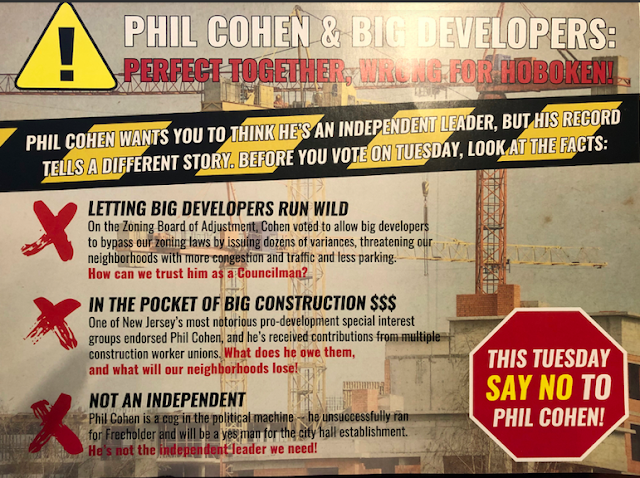 Controversy surrounding the big construction PAC has been making its way across the Mile Square. In addition to endorsing Phil Cohen and almost all of Ravi Bhalla's council slate back in September; the Stronger Foundations PAC is running online Facebook ads for them as exclusively reported here lending credence to the big development critique.

All of this connects to the massive Ravi Bhalla NJ Transit Redevelopment Plan he tried to keep on the down-low from the Hoboken public before a final vote since tabled by the City Council.

As seen in his campaign report, Phil Cohen received a $500 contribution from Local 825, the maximum allowed early last month.

Talking Ed Campaign Notes: At the time of publication, it's unclear if any other Ravi Bhalla council candidates other than Phil Cohen are receiving campaign contributions from Local 825.

The Ravi Bhalla sixth ward council candidate, Cristin Cricco-Powell is feeling the heat with questions about her stated position against overdevelopment earlier and the recent revelations she's endorsed by the Local 825 Stronger Foundations big construction PAC.

She posted instead on Twitter, pointing to unverified county minute meetings discussions about Hoboken development. In a condescending rejoinder, she says to Councilwoman Jen Giattino, "Pick a lane and stay in it."

Here's Cricco-Powell before the Stronger Foundations endorsement and underwriting for her:

And here's Cristin Cricco-Powell in online ads featured by the big construction PAC after: 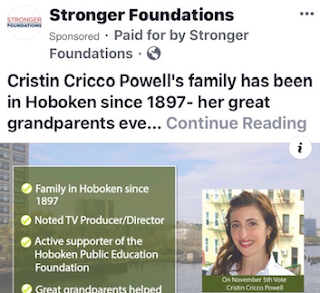 Pick a lane Cristin, or better yet, stay in your big construction PAC lane.


On a side note, reports are coming in of Ravi Bhalla calling individual residents and asking for their vote for his council candidates. Some of those calls came during the course of business hours Friday. If Ravi Bhalla is making campaign calls on taxpayer-paid time, that would be illegal. Don't expect an answer or any transparency about it though.

Ravi Bhalla is desperate to avoid an independent-minded City Council in the next two years where his second job with a Republican-connected law firm and tax increases have been highlighted and soundly rejected.

Councilman Michael DeFusco is feeling the wrath of Ravi Bhalla as the first time ever action against violating the 2011 pay-to-play ordinance surfaces days before the election.

Earlier, a toothless resolution falsely claiming to enforce the 2011 ordinance sponsored by Bhalla council backers Jim Doyle and Emily Jabbour. It was repeatedly ignored by the City Council and declared a political stunt. The rejections led to Ravi Bhalla trying to force a vote of the admitted non-binding resolution with a special City Council meeting. No quorum showed making the matter moot.

While Mason ignored the admonition from the Corporation Counsel, Ravi Bhalla decided its time to make hay against DeFusco going back to 2017 as campaign season is ending.

Ravi Bhalla earlier attempted to unwind the 2011 pay-to-play ordinance as exclusively reported here. He wants to compete with DeFusco for any and all growing special interest monies coming from outside the Mile Square.

HobokenHorse supported the 2011 ordinance when enacted and urged strengthening an enforcement provision during the Zimmer Administration. We have a feeling after the election, Ravi Bhalla will fulfill his promise to act against it so we're about to get more lonely in that support.

Posted by SmartyJones at Saturday, November 02, 2019