Winners & Losers: Picking up the pieces amidst the Ravibot rubble 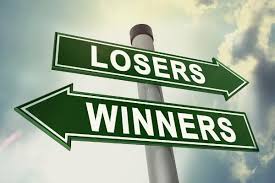 Some on each side of the ledger will be obvious and some not so obvious.

There's no arguing that Mayor Ravi Bhalla and his infamous cast of FacePunchers are losers, joined by the tarnished fading legacy of former mayor Dawn Zimmer. Whoever thought she'd cast her lot with a council ticket endorsed and underwritten by big development special interest powers across the Soprano State?

It's only the beginning of the bizarre turns and missteps as we map out the new Hoboken political landscape. Oh, it's being remapped as we speak.

Recall earlier the predictions here the Ravi-Russo Alliance was coming to an end with the November election?

One close political observer noted dryly after the polls closed, "Russo booked out of that deal with Ravi faster than the Flash. Who's going to break the news to Emily?"

So, with the dust settling on the aftermath here's the comprehensive list.

Ravi Bhalla - an obvious pick since his council slate was all but slaughtered by Hoboken voters less Phil Cohen who began his run in May and almost ran unopposed due to some early FacePunching with a transparently evil letter sent to Nick Maganuco's employer, a Manhattan-based financial institution.

The Hoboken mayor was big on power and projecting it even without much of any opposition on the City Council which cooperatively passed over 90% of what he wanted other than his 3% tax increase and endless praise for his broken promise out-of-the-gate second job.

Only two months into serving as mayor, Ravi Bhalla held a fundraiser at 10th & Willow declaring war on the City Council (secretly excepting Michael Russo of the Ravi-Russo Alliance) and waging a scorched earth campaign through his first two years against anyone he or his FacePunchers deemed in the way.

Losing four out of five ain't bad? That's the Mendoza line with Ravi Bhalla being offensive without the "silk hands." He overplayed his. Badly. Now, he's stuck with two-years of real checks and balances on a City Council that remains much the same. No rubber stamp for you!

Dawn Zimmer - the former mayor was let out of the attic and almost simultaneously endorsed the Ravi Bhalla council ticket as the powerful big development union PAC, Stronger Foundations. Then she went out targeting Tiffanie Fisher and Jen Giattino with their big development funded opponents claiming the opposite. The tarnish is sure to settle in and leave fading rust. Not the way to end your Reform legacy but she just did.

Migdalia Pagan Milano - on paper it was the most cynical of candidate selections. Plucked out of obscurity working for the mayor's office in the newly formed office of constituent services, the plan to harvest the might of the Ravi-Russo Alliance went horribly wrong. A reliable source claimed almost two weeks out her backing would be cut leaving her with nothing but a pile of big development mailers in her crashing wake. That astounding source proved to be 100% accurate even if it seemed unbelievable at the time. Migs went down faster than the Lusitania and Titanic.

Cristin Cricco-Powell - the darling "me too" candidate where me too meant stealing City Council President Jen Giattino's record and positions on overdevelopment while cynically taking money and online advertising from the same Soprano State big development interests behind Ravi Bhalla. Started off respectful but quickly veered off with negative and quite personal attacks. Sixth ward residents quoted they were told Jen Giattino was backing the Monarch Project uptown. Even Dawn Zimmer got into the act but all the negative campaigning failed. Solution-focused at the council forum, Cristin Cricco-Powell has a big future as US Senator of Austin, Oakland, and Portland. Don't tell her that's not viable. She deserves it or at least a Reality TV show facsimile.

Ravi Bhalla FacePunchers - these overpaid tone-deaf numbskulls in the mayor's office believed arrogance over competence would carry the day. If they spent half their time thinking how to make Hoboken better and focus on service they wouldn't be updating their resumes and begging HudCo powers for jobs. If John Allen escapes, who will run the day-to-day operations? Running race-baiting operations out of the mayor's office against the City Council wasn't a good look.

Councilman Jim Doyle - he saw his name penned in political operative narratives backing people he'll never have a beer with discussing policy let alone endorse. At least this time there won't be another special interest TV commercial attacking him after he was the lone vote against the Hilton Hotel. His continuing hell will be suffering two more years on the City Council as Hoboken activists keep asking, "who saved the non-transparent NJ Transit Redevelopment Plan?" Raise your hand Jim and suffer the indignity with that day after the election vote that will live in infamy.

Stan Grossbard - an insider architect of negative campaigning inside the Ravi Bhalla eternal campaign, he was convinced more Big Lies, smearing and attacks would produce the same result as in 2017. There wasn't a quick fix terror flyer available this time. Karma is a you know what?

Councilwoman Emily Jabbour - who will commiserate with her at City Council meetings when plans go awry? Michael Russo won't be fulfilling that role anymore.

Ravibots - All self-righteous attitude without the good government policy, they thought the mantle of Reform would stick no matter the growing turds of hypocrisy from the boss. They kept bragging to each other in their bubble how they were going to lay waste and destroy everyone in their cult of personality leader's path. There are two full years of crow eating. Start chowing down and enjoy the view of Ravi Bhalla NJ Transit towers with it.

Councilman Mike DeFusco - Whether you like to hear the words "European markets" or not, you're going to hear it a lot more. He was the top target of Ravi Bhalla yet the mayor's campaign unplugged efforts against him to invest in all-out attacks in the second and sixth wards against Tiffanie Fisher and Jen Giattino. They're scared to death of DeFusco competing for the big outside special interest money and his never-say-die Terminator attitude on the campaign trail. He's already running joined by Michael Russo as they begin their respective efforts for Soprano State funds and the mayor's chair.

Councilwoman Jen Giattino - being in the heart of Hoboken, her good government light was a beacon Ravi Bhalla and his cohorts badly wanted to see extinguished. She grew her vote totals from 2015 and showed she was willing to take on all comers and boy did they come. Ravi Bhalla, his wife, Dawn Zimmer, and even a former NHSA commissioner went out knocking on doors throughout the sixth ward, all for naught. Redemption tastes all the sweeter and came with hard work, moxie, and guts. Giattino won by about 10 points pulling away and proved she has it in spades.

Councilwoman Tiffanie Fisher - her good-natured policy wonk style was challenged unlike in her 2015 election. After Giattino, she was the top target of the mayor's office. Everything and the kitchen sink was thrown against her. High-priced out of town political communications gurus, the most campaign mailers against in any council ward race (six) and Ravi Bhalla spending inordinate amounts of time repeatedly going through buildings even illegally into the Hudson Tea.  Some low-information voters bought into the attacks but she countered with strong factual campaign efforts of her own and won the day with over 1,000 votes adding the provisionals. Policy leadership is her next challenge.

Councilman Ruben Ramos - he won re-election easily but the shocker of it all is he also reportedly won the 4-2, the home of Dawn Zimmer and her base of support in the fourth ward. Did she forget to make an effort in her own backyard? Ramos didn't and will play a big role in shaping development in Hoboken as a result.

Phil Cohen - he lucked out when Councilman Peter Cunningham announced he would be retiring from public life after 12 years on the City Council. Getting an early start in May with campaign funds crushing his two opponents combined gave him the lift to narrowly avoid a runoff. He may luck out again if the City Council approves Ravi Bhalla's NJ Transit Redevelopment plan before he takes office in January. Will he publicly voice concerns and push to make changes prior? Wait and see.

Nora DeBenedetto - she received all the Old Hoboken vote and was the beneficiary of a massive financial effort on her behalf by the mayor's office generating a bigger vote against Tiffanie Fisher then in 2015. It doesn't matter that Dawn Zimmer didn't know who she was; that's how proxy wars are conducted. Those collective efforts failed against a hard-working councilwoman/opponent. Nothing to be ashamed about in trying.

Councilwoman Vanessa Falco - showed some loyalty to the head of her ticket getting out the vote for Mike DeFusco on election day. Her focus on affordable housing sees an advocated boost as a result.

Hoboken residents - enough showed they were not sleep-walking and were immune to the Big Lies platform out of the mayor's office. It's short-lived as they are immediately thrust into the challenge facing down the Bhalla-pushed NJ Transit Redevelopment. Victory may be short and trumped quickly by City Hall cynicism, ambition, and statewide development interests. Time to pick up the pieces and act before it's too late.