The following report is an accumulation of investigative efforts, analysis, and opinion now into the tenth year on Hobokenhorse.com covering Hoboken government, politics, and corruption. The opinions as stated here are the sole responsibility and copyright of MSV. © 2019 All rights reserved.

The newest exposure of Mayor Ravi Bhalla's office in last week's Hudson Reporter story on payroll hijinks and the political attacks on the City Council opens the door to further examination on the abuse of taxpayer monies there.

Whether it's abusing the use of the Nixle system, the City of Hoboken social media or the public's microphone at City Council meetings, the trio of political operatives paid over $300,000 annually in the mayor's office are doing political business for Ravi Bhalla not the business of the people.

Let's revisit the original exposure when Mike Donnelly was first discovered connected to Head Face Puncher John Allen in Ravi Bhalla's office last summer. The revelation after his attacks in first ever council appearance and then almost immediately was compounded with him signing a legal ethics complaint filed in Trenton. The operation has been led out of the mayor's office by John Allen who is a lawyer with Ravi Bhalla's blessing. The odor is errily similar to the earlier issued Ravi Terror Flyer.


With the Hudson Reporter story fueling further scrutiny of the political attacks last year on the City Council orchestrated out of the mayor's office, former Bhalla for Mayor campaign manager, Vijay Chaudhuri attempted damage control from his new communication manager position in the mayor's office. He reportedly tried to get the Hudson Reporter to put Mike Donnelly into their story. That didn't work so after the story came out last week, only hours later a letter immediately appeared from, well at least signed in the reappearance of Mike Donnelly. That's not a coincidence and neither are the talking points of whiney complaints from Ravi Bhalla's political face punchers.

So what drove the face punchers' efforts to using Donnelly, already exposed badly in his earlier first-ever council appearances and a then legal complaint created out of the mayor's office? Once again, Ravi Bhalla's political operatives do Donnelly no favors. They've committed serious unforced errors and it merits further exposure. The letter portion appears in italic:


For anyone who wants to go out and speak against corruption in government at a Hoboken City Council meeting – beware. You may have a City Council member viciously attack your character like Tiffanie Fisher did to me.

Note the overblown political ham-fisted tone. Getting nabbed in a failed political operation last year using the public's microphone at council meetings doesn't make one a victim. It makes them damaged goods and appear wimpy for allowing John Allen & Co. to use them again when caught dead to rights. The phony corruption angle is a nice touch since the letter clearly avoids the recent revelations of shady money deals involving Ravi Bhalla.

Presumably, everyone gets their start in politics somewhere. For me, it was listening to council meetings where my council representative, Councilwoman Fisher, referred to Ravi Bhalla as “unelectable;”

Here's irrefutable proof and a terminal error. Exactly when did Donnelly allegedly hear this listening to a council meeting? Let's help Donnelly out here as Ravi Bhalla's political operatives did him another terrible disservice. The allegation fails and goes down in a flaming heap because it simply doesn't exist. No one is going to produce this allegation on any City Council video. Ever.

was the only no vote for our Hispanic director of environmental services; and was the only one not to vote in support of our first African-American director of community development.

Yet another major face puncher error out of the mayor's office. They're literally complaining about two meaningless votes having no bearing on an outcome. The letter writer, not Donnelly, claims this was the impetus to his getting involved. When? Donnelly had already departed the scene last summer when MSV published his connection to John Allen in the above photo. These two inert votes followed months later, another obvious tell that it's the face punchers' gripe out of the mayor's office. They desperately can't contain their desire to eliminate a good government voice on the City Council in Councilwoman Tiffanie Fisher. The objective is to eliminate good government voices.

That the reference to these two innocuous votes months after Mike Donnelly had disappeared from the scene additionally proves the letter is not his and is not credible. The citation  of two less than minor votes however came from John Allen friend no. 2 who followed Donnelly later. That political operation out of the mayor's office was thoroughly decimated with the appearance of the next friend John Allen sent in and had report to him AT HIS HOME immediately after.

It was the second friend of John Allen who dropped a dud at a later City Council meeting but didn't make it 24 hours before being burned. John Allen friend no. 2 was seen leaving mid-meeting and going right to the door of John Allen. Donnelly couldn't have claimed this as a reason to insert himself as these talking points from the mayor's office weren't his and came long after he went to ground.

These are not the sharpest face punching political operatives, are they?

After expressing my First Amendment rights to speak out on issues I found to be important, I opened my inbox days later to see thorough research done on me, including my age, profession, and misleading — and in some cases, downright wrong — personal information about me published in an email by Tiffanie to her constituents. I found this to be a vicious attack on my character and a blatant act of political intimidation, which is something that I will not stand for.

No rule against using your right to speech, no matter how badly it turns out. Did Donnelly really sign off on this manufactured letter from the mayor's office? He might have sat this sorry embarrassment out. No research needed with an online photo. John Allen screwed Donnelly last year and is royally screwing him over again.

Her insinuation is that because I’m young, not a lawyer, and haven’t been active before, I don’t have the right or ability to speak my mind on her actions. As her constituent, it’s not just mind-boggling and insulting, but I believe this is clear intimidation by a public official and should be called out for what it is — bullying through scare tactics.

Speak as much you like; the clown show's in town but political operations go sour when exposed.  That's Donnelly's signature on a tepid complaint filed in Trenton. Will he be filing against Ravi Bhalla for his serious financial transgressions? As you can see, John Allen is no super lawyer and no super political operative. Getting busted last year in this political operation isn't an act of intimidation. It's exposure of a political hit job like this letter coming out of the mayor's office. The intended objective is political intimidation against Councilwoman Fisher and by extension any and all council members. These kinds of stunts backfire fast when evidence surfaces as documented here.

Perhaps Ms. Fisher should look in the mirror when she accuses me of launching political attacks. Her recent record speaks for herself:
1. Attempting to strip the mayor’s office of one staff member, despite a legal opinion from the law department stating that it was improper to do so.

Why Ravi Bhalla's face punchers insist on this previously destroyed canard is something only they can explain. They won't. The potential position elimination was for one of the three face puncher positions if someone leaves in the future. Only a mayor's office face puncher could be so dumb to repeat this when it doesn't exist. Councilwoman Fisher has a superb record on and off the council unlike the weak sauce offered in this letter clearly created by Ravi's nasty face punchers. No one should lay this at the feet of Donnelly; these face punchers are not self-aware. There must be accountability in the 2019 budget. This is occurring due to the bloated abuse of $300,000 in Hoboken taxpayer monies out of the mayor's office.

2. Refusing to reimburse a staff member in City Hall for the cost of pizza during a community event.

PizzaGate! A bottom of the barrel complaint only a face punching political operative could love. It's utterly insipid as Ravi Bhalla attempted to spend $130 of taxpayer money on pizza for his self-declared private meeting. Based on the far more serious news about Ravi Bhalla and shady money deals in recent days, you would have thought a lesson would be learned prior.

3. Fundraised for an alt-right local blog, which posts disgusting and vile things about residents, including using the word “retard” as a nickname.

Hit the eject button and land squarely right into crazy Nancy Pincus Sybil territory. These are some of her favorite lies. This is not the failed rhetoric of anyone other than fabricating Ravi Bhalla political operatives in the mayor's office. It's an obvious attempt at political retaliation for being exposed in a series of corruption stories appearing here on MSV.

4. Attempted to strip appointments from Mayor Bhalla to the rent control board
And the list goes on.

That's it? A dispute quickly resolved more than a year ago about appointments to one Hoboken board? This is the last drink in a string of failure coming from Ravi Bhalla's political operatives in the mayor's office. It's a minor difference under the bridge only a Ravibot could hold dear.

This letter is clearly manufactured from the crybaby face punchers out of the mayor's office. As evidenced, it's very likely, Donnelly never crafted a single sentence. It's dripping with resentment from the self-entitled face punchers against Councilwoman Fisher. These are tired, flacid and fabricated complaints the Ravi Bhalla face punchers tell each other in the mayor's office. It's their laundry list of electioneering not organic concerns of any John Q Public and certainly not one Mike Donnelly.

Vijay Chaudhuri was contacted Sunday to explain his role in this hot mess. Both he and his fellow face puncher political operatives and Ravi Bhalla have remained silent since his dirty money deals that came out a week ago and the dirty money hasn't stopped surfacing since. They can't muster any defense about Bhalla and $70,000 in local government contracts going to his "second job" and his illegal PAC money. These actions are indefensible and everyone knows former mayor Dawn Zimmer would never condone it nor any good government advocate in Hoboken. That of course would include Councilwoman Tiffane Fisher among others. Be ready, these face punchers are getting ugly. 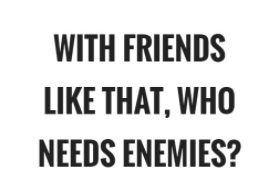 Talking Ed Note: No one would ask friends to reinsert themselves into a previously destroyed political operation. Of course, the victims, John Allen's "friends" didn't know enough to realize that exposure would happen almost immediately. Then again, these overpaid Ravi operatives putting these poor guys up to this are beyond self-indulgent, self-entitled, woefully narcissistic and arrogant.

Any friend deserves better. Both of these exploited friends show the state of the mayor's office is corrupt.