When dictatorial power comes up against constituent service

This Jersey Journal cover photo is modified as Mayor Ravi Bhalla was in City Hall during the incident. 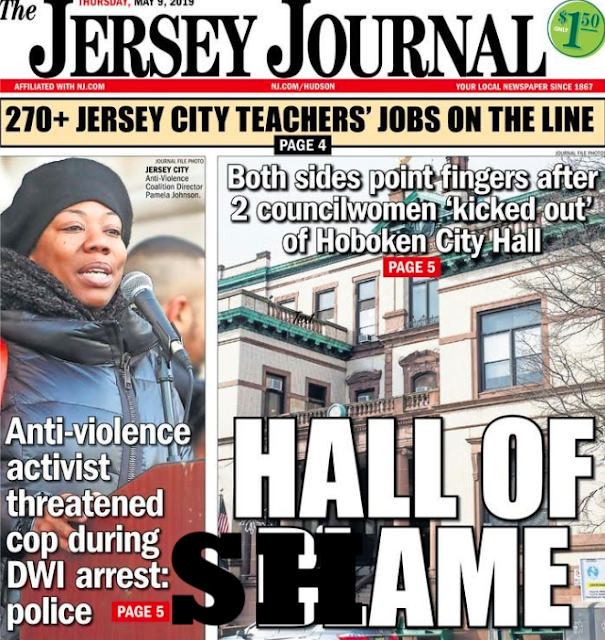 The Hoboken council ward races are months off in the distance but not everyone thinks to wait is a good thing.

To kick off the party, unknown members of the Ravi Bhalla mayor's office decided it would be grand to send a security detail out in City Hall to intercept City Council President Jen Giattino and Councilwoman Tiffanie Fisher and have them thrown out of City Hall.

Their crime? Then went to the Hoboken rent control office on the third floor on a matter relating to a Mile Square City resident facing eviction. Were Ravicams being deployed to track their steps?

Ravi Bhalla's Chief of Staff saw them walking down the stairs leading to the lobby and is suspected of going into a foaming seizure of spastic rage.

It's unclear for the moment exactly who gave the order prompting Business Administrator Stephen Marks to mobilize the Gestapo but he fulfilled the order to the utter embarrassment of the security staff in City Hall.

Reportedly intercepted while exiting the lobby of City Hall, there was a pause as at least one of the offending constituent serving councilmembers opted to stop by the City Clerk's Office thus delaying the dictatorial boot.

Rumors are circulating the police state action on Tuesday followed with City Council Jen Giattino seen all over City Hall yesterday in the basement level, the first floor and then the second floor where she was offering assistance to at least one director on an important matter.

No arrests have been reported. Maybe Ravi Bhalla's henchmen will give that order Friday to celebrate his birthday.

Who elected these Ravi Bhalla campaign people to anything?

The Jersey Journal joined in covering the embarrassing melee after the untoward pile of vicious lies began filtering out of the mayor's office yesterday in an attempt to justify their actions.

We're not even going to touch the anti-women banshee cries used. Abominable.

Talking Ed Note: No, you don't need any appointment to visit the Hoboken Rent Control Office, the City Clerk or the parking department among other things as a resident of the Mile Square City.

If you are a council member who puts Hoboken constituent service above the politics of the occupant of the mayor's office, well, that's an entirely different matter.

Update: Mayor Ravi Bhalla was in City Hall at the time of the incident and authorized the order.
Posted by SmartyJones at Thursday, May 09, 2019
When dictatorial power comes up against constituent service
2019-05-09T09:04:00-04:00
SmartyJones
John Allen Hoboken|John Allen Hoboken City Hall|
Comments