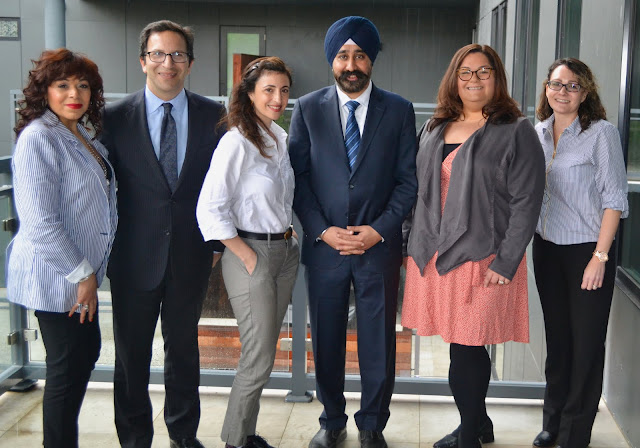 Mayor Ravi Bhalla of Hoboken today unveiled his slate of Council candidates for the Fall Ward elections.  The Team Bhalla slate of candidates are:
·         First Ward:   Migdalia Pagan-Milano.  Migdalia is a lifelong resident who began working with the community as an assistant in the Cultural Affairs Department for the City for Hoboken. She was instrumental in organizing Hoboken’s first Pride week. Currently, Migdalia works in the newly reconstituted Department of Constituent Affairs where she effectively finds solutions to residents’ day to day issues.

·         Second Ward: Nora Martínez DeBenedetto.   Nora is a teacher at Kaplan Cooperative Preschool.  She coordinates Art in the Park for the City of Hoboken and was a founding member and volunteer organizer of the Hoboken Uptown Farmers Market for ten years.  She is also a lifelong resident of Hoboken.
·         Fourth Ward: Lisa Sprengle.  An attorney, accountant and a mom, Lisa currently works as the Controller for a large New York based company, actively involved in all aspects of the business large and small, including legal, finance, accounting, human resources and even store construction.

·         Fifth Ward:  Phil Cohen.  A long-time community activist who has served on number of City and community boards, including the Zoning Board, Phil currently serves on the Rebuild by Design Citizens Advisory Group and as the Hoboken Democratic Party Chair. He is an attorney.

In Trenton, the City Council budget amendment reducing a three percent increase proposed by Mayor Ravi Bhalla to approximately one-percent is under review.

That won't change based on the failed attempt by Team Bhalla to undo it with a budget amendment rejected last night seeking to reinsert much of the reduced spending.

The City Council overwhelmingly rejected the Team Bhalla budget amendment 7-2 upholding the previous budget amendment and retaining most of the earlier spending reductions of less than a million.

Council members Jim Doyle and Emily Jabbour saw their resolution go down to defeat but not after attempts to tease about funding for a tenant advocate and complain about "revenge" and what Councilman Michael Russo would grandstand calling "petty" on all sides before joining the majority vote.

Doyle attempted to dangle a carrot, artfully suggesting things could go well for tenant advocate funding or not. Jabbour bemoaned how the cuts in spending were targeted. She spoke as someone who understands a federal employee can't be but believes it's at issue now never mentioning taxes once.

The Department of Community Affairs (DCA) will review and get answers to some questions. They're overwhelmed with technical problems and backed up on the municipal budgets statewide.

On a different tack or rather, tackless, the First Amendment is a target for the mayor's office in their latest political operation, or as one keen Hoboken observer says, "right out of their playbook."

The target, this story or an attempt to utilize it, deeming it "racist" for showing Ravi Bhalla "going to the mattresses" in uniform from the Sacha Baron Cohen comedy "The Dictator" on his higher tax plan and throwing out councilmembers in City Hall helping a Hoboken resident.

The same reader-submitted graphic below was used once before receiving nothing but a yawn from the mayor's office (or anyone) last year.

This year is different. It's election season and there's some expectation a Team Bhalla council slate may be announced as soon as next week.

Word on the street is that in addition to an organized but flailing campaign to depict Ravi Bhalla a victim of a "racist image" on Facebook and Twitter, Chaudhuri is pitching it to local media.

To this point, it's generating yawns. A few pointed responses by this Horse the other day on Facebook and yesterday on Twitter generated zero reaction. People may be feeling they're being politically exploited so have fallen silent and some Hoboken residents are creating blowback to the latest race baiting operation run out of the mayor's office.

Ravi Bhalla is seeing significant backlash reportedly across Hoboken as word of how he threw out two councilwomen in City Hall to help a resident at the rent office spreads. Time to change the narrative!

That's the playbook they're back to using even if they have to pretend the satire wasn't published by someone who voted three times for Ravi Bhalla previously but dares to differ with his ACTIONS as mayor at present.

Here's one respondent sprouting organically against the Chaudhuri led political operation on Twitter: 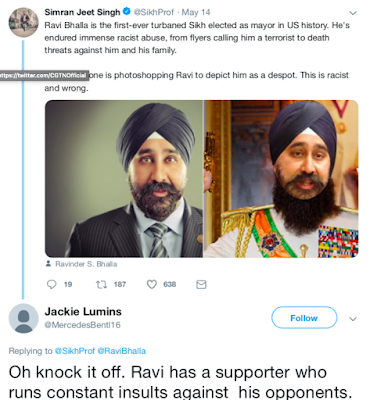 If you thought this kind of Al Sharpton race baiting attacks organized right out of the mayor's office would end last year, you're wrong.