Councilman Peter Cunningham: 'I took on corruption; now it's time after 12 years for someone new'

I was elected to the Hoboken City Council on June 2007 at a time of tremendous change in our Mile Square City.  We launched an exciting period of reform and transitioned from the old days of corruption and mismanagement. Dawn Zimmer fought two runoffs in the summer and Fall of 2007, and, as a new member of City Council, I led the reform efforts legislatively in what turned out to be the beginning of the most amazing time in Hoboken’s local government history.  In 2009, as City Council President, we instituted unprecedented financial and economic reform in Hoboken City government.

I understood that corruption had the potential to ruin our City.  The primary examples included a Director and a Mayor going off to jail, and a Councilman caught on tape willing to accept a bribe.  We went from State Supervision to attaining one of the top credit ratings in New Jersey.  We financed critical projects to support our infrastructure and build parks.  As Chair of the Revenue and Finance Committee of the Council working closely with Mayor Zimmer’s appointments I selected, we built a solid, sustainable financial infrastructure.  My experience in and knowledge of best practices in public finance was critical to these efforts.

I am also proud of the difficult campaigns for new Council members and the continuing re-elections of Mayor Zimmer.  These were hard-fought races which insured that reform efforts were not only temporary but a lasting foundation for good government in Hoboken.  Of particular pride is the appointment of our Zoning Board and its leadership in responsibly examining all aspects of development.  Other proud moments include saving our hospital and the community garden built at Fox Hill Gardens by the efforts of our broad 5th Ward community two years ago.

Twelve years is a good long time to serve on City Council, and I am more than proud of my accomplishments.  I can say, from my perspective, I have made this City proud of who it was, who it is today, and who it will be into the future.  With that being said and after careful thought with family and friends, I have decided to not run for re-election this year.  I must now devote increased time to my professional life and more importantly, my responsibilities as a husband and a father.  I entrust my legacy to my council colleagues Jen Giattino and Tiffanie Fisher.  We need to stay grounded in the foundation of reform initiated twelve years ago and remain committed to good government.  Politics is always inherent to the process, but healthy debates about policy should always be respected and encouraged.

As you can see, I am not “anointing” the next 5th Ward Councilperson which was done by the previous Mayor.  While some close friends believe I should, it would be hypocritical.  I believe a strong, independent candidate will emerge, and I look forward to working hard to ensure his or her election.

I look forward to hearing from you as the democratic process begins right here, right now with you.  Please be sure to circulate to all your friends and neighbors, and let me know if you have any questions. 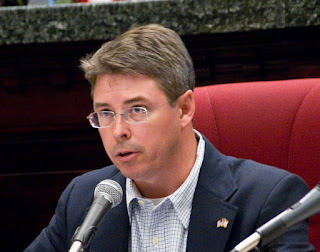