The group is described as having received money in the past solely from the labor-management fund of the International Union of Operating Engineers, Local 825.

The September 25th online endorsement was kept mum in the Mile Square City as Ravi Bhalla attempted to roll out his NJ Transit plan to a final vote without any public notification or input. 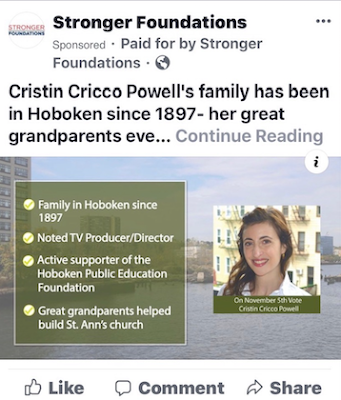 In 2017, Stronger Foundations spent tens of thousands of dollars officially in registered efforts to aid Ravi Bhalla and his council slate featuring Jim Doyle, Emily Jabbour, and John Allen. (Allen's bid would fail but he was brought into the mayor's office as a city employee.)

Cricco-Powell a Reality TV producer is a former Manhattan resident who is not known for any issue-oriented activism in Hoboken. She is seeking to replace City Council President Jen Giattino in next Tuesday's council elections.

Further details on the powerful statewide real estate developer, Mack-Cali, getting behind Mayor Ravi Bhalla and his first ward council candidate are coming to light.

HCV reports fully $30,000 has been earmarked from Mack-Cali to the newly-formed NJ Community Initiatives on October 18th.

The round-robin with tens of thousands of dollars heading Hoboken's way a week before the election is expected to be used in a direct mail campaign aiding Ravi Bhalla's effort to defeat his nemesis, Councilman Mike DeFusco.

DeFusco slammed the hypocrisy of his opponent and pointed directly at Ravi Bhalla as being the culprit behind the big real estate money flowing into his opponent saying, "Money from major real estate players like Mack-Cali doesn't come for free and First Ward voters deserve to know exactly what kind of shady deal Migdalia and the Mayor made to win this support."

For months, Hudson County View and Hoboken Horse have delineated the sketchy routes for Dark Money and special interest big development political committees and PACs to hit Hoboken making a salutary pit stop at the mayor's office to Ravi Bhalla.

HCV writes the "money has been earmarked for direct mail, printing and postage, for Middalia Pagan-Milano..."

Apparently, the word was not intended to be confirmed by muckraking media a week out to the election prompting an angry response from the Rhode Island Ravi Bhalla political consultant who manages the communications for the mayor's council slate.

"Councilman DeFusco knows full well that the contribution from Mack-Cali was made to the NJ Community Initiatives PAC- not to Ms. Pagan-Milano, but chooses to misleadingly conflate the two," said Rob Horowitz.

For more on this story, please see the Hudson County View.

Talking Ed Note: Mr. Horowitz may wish to believe the laundering operation through newly created PAC vehicles offers aid and comfort to the hypocrisy of Ravi Bhalla and his council slate. Hoboken voters may see it differently.

The mayor's office isn't done yet. Don't listen to what they say, watch what they do.

Councilman Mike DeFusco is sounding the alarm that a Political Action Committee funded by real estate interests is poised to spend tens of thousands of dollars over the next week to influence Hoboken’s City Council elections. According to documents filed with the New Jersey Election Law Enforcement Commission and reported today by the New Jersey Globe, real estate giant Mack-Cali has just funneled $30,000 in special interest money into the NJ Community Initiatives PAC for the direct purpose of influencing the outcome of the municipal election. The documents show that the powerful developer has already spent nearly $20,000 to support Mayor Ravi Bhalla’s handpicked candidate in the First Ward, Migdalia Pagan-Milano, in an attempt to remove independent leaders like Councilman DeFusco from office.
“Much like what we saw two years ago, special interest groups are pouring dark money into Hoboken in an attempt to alter the outcome of our municipal elections,” said Councilman DeFusco. “We are now just eight days away from an election that will determine the future of our city, and it is outrageous that Migdalia Pagan-Milano is willing to accept this kind of shady support. Money from major real estate players like Mack-Cali doesn’t come for free, and First Ward voters deserve to know exactly what kind of shady deal Migdalia and the Mayor made to win this support.”
The ELEC filing is publicly accessible and can be found here.
Posted by SmartyJones at Tuesday, October 29, 2019
Councilman Mike DeFusco "Sounds Alarm on PAC funded by Real Estate Developer Poised to Hijack Hoboken City Council Election"
2019-10-29T08:32:00-04:00
SmartyJones
Comments