Grist for the Mill: Who is behind the 2017 Ravi Bhalla Terror Flyer? 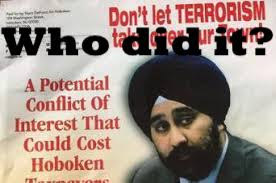 As Hoboken prepares to vote in contentious council ward elections Tuesday, today is an anniversary of sorts.

Tonight is the two-year anniversary of the Ravi Bhalla Terror Flyer hitting the streets of Hoboken.

Unlike Hoboken's volatile political history of midnight flyers at election time; these flyers were discovered almost instantly on an early Friday evening, four days before the 2017 mayoral election.

Some residents fear a similar episode. One Hoboken resident recently expressed worry on Facebook in response to a post by Ravi Bhalla's first ward candidate that a similar flyer attack could occur.

HobokenHorse is disclosing part of its investigation in the public interest as this is an issue of public concern with another Hoboken election before residents of the Mile Square City this Tuesday.

In a phone interview yesterday, Mike Makarski,  a former spokesman of the Stronger Foundations PAC quickly bolted the call when questions about the Ravi Bhalla Terror Flyer arose.

The conversation began with an inquiry on the recent ad campaign underway on behalf of the Stronger Foundation PAC's endorsed candidates in Hoboken.

Most consist of Mayor Ravi Bhalla's council slate with council members Michael Russo and Ruben Ramos endorsed in the third and fourth wards.

Makarski indicated he no longer acted as the PAC spokesman but said, "We don't typically comment on what the soft side of the organization does."

Stating he worked "internal for ELEC 825," the following conversation is recounted. HH is HobokenHorse and MM is Michael Makarski.

MM: "Uhm, what are we worried about here? I don't know what we're trying to do here."

HH: "When did you learn about the efforts behind the Ravi Terror Flyer in 2017?"

HH: "You don't know about the Ravi Terror Flyer in the 2017 election?"

MM: "You should reach out to someone else."

Makarski hung up during a follow-up question. A voicemail left shortly later inquired about a message allegedly sent to a Hoboken resident.

That alleged message identifies the crane operators as orchestrating the Ravi Bhalla Terror Flyer and said:

"The crane operators did it!"

At publication, there's been no reply to yesterday's voicemail.

Other Hobokenites participating in the 2017 mayoral campaign were less than sanguine about the origins of the terror flyer, especially close to the 2019 election. Most didn't want to speak on the record but some admitted they've heard the whispers considered widespread inside City Hall.

On background, one Hoboken resident involved in the 2017 mayoral elections intimated what they've heard after the 2017 election.

"A person who represented the crane operators union gave hints they were behind it," they offered.

Further, they added, "All evidence points to the crane operators, the same Local 825 that supported Mayor Bhalla and is active in this (election) campaign."

There's also an earlier bandied about incident at the annual League of Municipalities held each year in Atlantic City. After the 2017 election, an intoxicated individual was overheard bragging at one event how the Ravi Bhalla terror flyer achieved its desired outcome in the Hoboken election.

While a portion of that story found its way into the Hudson Reporter, the same individual reportedly took credit for the election result in the Hoboken mayoral race. Reliable sources stated the same individual then bragged they were responsible for getting Ravi Bhalla elected mayor.

Former mayor Dawn Zimmer who joined with the Stronger Foundations PAC this week endorsing Ravi Bhalla's council ticket was contacted yesterday about today's two year anniversary of the terror flyer. She declined to address the matter and quickly got off the phone.

To date, Stronger Foundations has spent over $7,000 for online Facebook ads in Hoboken and in other elections across New Jersey.  The PAC is a proponent of the NJ Transit Redevelopment Plan put up for a vote in the Hoboken City Council.

Recently, the City Council declined to conduct a vote. Council President Jen Giattino asked why the mayor's office made no notification to the public on the massive redevelopment nor offered the public a meeting. She publicly announced she was removing the controversial plan for a vote citing only a day separated a hastily scheduled public meeting the following day.

Grist for the Mill is HobokenHorse.com's rumor column but its success makes it the most popular column in all the Mile Square City. Have a tasty carrot for Horsey? Send it to smartyjones@me.com and be assured your confidentiality is protected with MSV's State of NJ Shield Law protections upheld repeatedly in Hudson County Superior Court.

Dear Friends and Neighbors,
Hopefully everyone has their plans made to vote!  Join me Election Day evening for my Debate Watch Party at Bin 14 and bring your "I Voted" sticker for special discounts.  More to come... 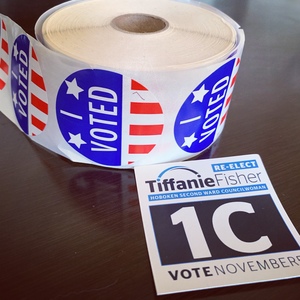 Make Sure you vote! Whether early with a vote by mail or early on Tuesday to get it out of the way!   This email gives you everything you need to know for this year’s election including:
HOW – VOTE BY MAIL, LAW CHANGES, AND PROVISIONAL VOTING
Get your ballots in – they need to be postmarked no later than Election Day!  I am starting with this because as of this writing only 141 out of 549 of you who have received ballots have cast them! This is literally the easiest way to vote - you don’t have to get off your couch.  I hope this ratio increases dramatically between now and Tuesday…
The law recently changed and we saw more than a doubling of the VBM list and I am concerned that many of you on the list may not realize it (based on feedback I have received).  Reminder that if you voted by mail any time in 2016-2018, you have been mailed a ballot this year.  Which means you can either vote by mail, or vote provisionally at the polls.  Don’t worry, provisionally is basically filling out a ballot by hand at the polls and takes an extra 60 seconds so don’t let this dissuade you.
Going forward if you want to be removed from the VBM list you need to submit a form to the County Clerk (click for the form).
WHO – CANDIDATES / OFFICES ON THE BALLOT (INCLUDING ME!)
You have up to TWELVE votes you can cast:
Here is what the ballot looks like, click here to take you to the website where you can see a larger version.  Familiarize yourself before you vote. 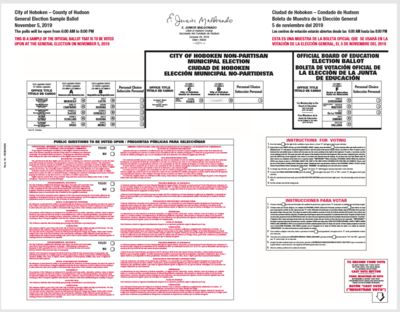 There are two columns each for State and County level candidates/offices - Column A is for Democrats and B is for Republicans.
City Council choices are in the middle of the page and have either two or three columns depending on which ward race.  In the 2nd Ward, please VOTE1C for me! 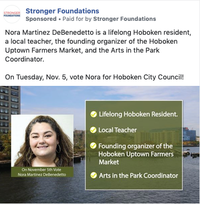 Additionally she has been pretty silent on all issues other than Monarch and a pedestrian safety plan that looks decidedly like the one I have been working with the administration and the County on and already implementing.
By contrast, I have sent out 5 mailers – an intro one on my platform, three issues based ones on development and the waterfront (and a GOTV one coming…), many newsletters/letters updating you on issues important to you and one defending myself against my opponents attacks.
As an FYI and not sure if you are aware but as expected, Mack Cali, a public real estate company who owns property in Hoboken, contributed $30,000 through a SuperPAC called NJ Community Initiatives, affiliated with a Hoboken vendor, to put out attack ads that favored Team Bhalla candidates.  So far, $19,420 of this has been spent in the 1st ward just last week – 4 mailers already and counting.  If you think this came to town uninvited, you are mistaken.  In the past, this was never something those who considered themselves “reform” would do.  Mayor Zimmer historically would not have tolerated this, but today she endorses candidates who do?  The world is officially upside down.

Please vote in a way that sends a message that ugly and divisive politics with attack ads and special interest, outside money is not acceptable in Hoboken.  Vote1C in the 2nd (and 6th) ward.  And please forward this to anyone you think might benefit from this information or need a little encouragement. As always, please let me know if you have any questions on this or anything else that is important to you.  You can email me or call me anytime at 201/208-1674.