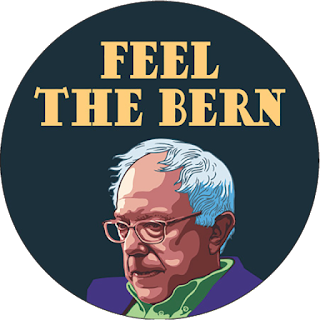 Denied a caucus win in Iowa early last week, Bernie Sanders would not be stopped from an evening victory declaration in the New Hampshire primary this time.

Announcing his objective to transform America, Sanders topped all Democrat Party candidates with over 76,000 votes in the New Hampshire primary last night.

In second was red diaper baby challenger, former South Bend, Indiana mayor Pete Buttigieg boosted by his Iowa victory declaration under a cloud of irregularities yet unresolved and leaving the Associated Press unable to declare a victor there.

Minnesota Senator Amy Klobuchar saw an upswing to third as she attempted to stake out a middle position among candidates burying fellow Senator Elizabeth Warren to fourth place.

Warren coming off a fifth place finish in Pocahontas County Iowa last week and third overall saw her presidential ambitions stumble in New Hampshire as she sinks to a 1024 to 1 long shot.

Further down the list, the mainstream or DNC Media's declared frontrunner, former VP Joe Biden cratered, this time coming in fifth and earning zero delegates for the Democratic nomination as predicted here.

Biden blew off his last New Hampshire event flying to South Carolina where he hopes to mobilize a stronger showing. He'll look to rescesitate his campaign with his unique pitch to voters. He called one New Hampshire student a "lying dog-faced pony soldier" in a public forum over the weekend.

With about 90% of the tallies counted late Monday, the Associated Press published the results: 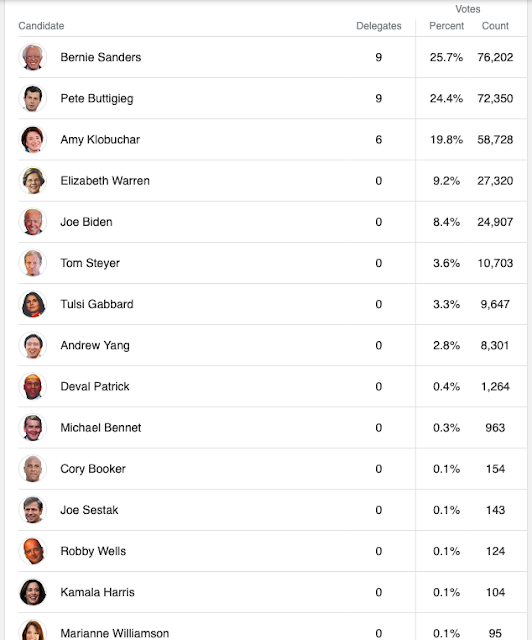 Elsewhere, former New York City mayor, Mike Bloomberg (D) who has spent approximately $300 million to date in his presidential bid is lying in wait to make an outright purchase of the Democrat Party. He's set to spend many hundreds of millions more in an outright oligarch-like bid unseen in US political history.

A video of Bloomberg went viral yesterday earning millions of views as he spoke about his law enforcement approach to minorities "throwing them up against the walls..."

On the Republican side, President Trump easily won the New Hampshire primary against nominal opposition.
Posted by SmartyJones at Wednesday, February 12, 2020