Dear friends and neighbors,
The list of notable news only seems to get bigger in Hoboken, never smaller.  Here is what this newsletter will cover:
TRIBECA FILM FESTIVAL EXPANDING INTO HOBOKEN
Let’s start with the fun news.  Hoboken Girl blog reported yesterday that the Tribeca Film Festival will be expanding its events into Hoboken, specifically using our own Mile Square Theatre as one of their venues.  The organizers of the festival, founded by Robert DeNiro after 9/11 as a way to attract visitors back to downtown New York, stated Hoboken’s long term history as a film set (eg. On The Waterfront) is what made them think about Hoboken.  This will also be a great opportunity to support our local businesses and as a current board member of the new Hoboken Business Alliance, I can say we are already looking at ways to be able to do just that during this celebrated event which happens April 15-26.  More to come…

MUNICIPAL FISCAL MESS
Where we last left off, our Business Administrator has left, the administration stated publicly we have a projected deficit of $7.4M and I felt the number was potentially much bigger as the administration was not including in its estimate the impact of city’s use of the surplus to balance the budget/keep taxes low over the last two years.  We had a Revenue, Finance and Infrastructure subcommittee meeting with the administration where we agreed that the starting point for the budget gap has to include the surplus impact on the budget and as such, the gap is in fact just under $14M.
***Clarifying point - we have been using the phrase budget deficit when we should be using projected budget shortfall or gap.

This gap has now shrunk by approximately $1M to just under $13M with the inclusion of increased PILOT payments that the administration did not previously account for in its estimates, the majority which is from the recently opening of 770 Jackson.  To help give you a visual of what the budget gap looks like in the context of the overall municipal budget, below is a historical summary that I put together. 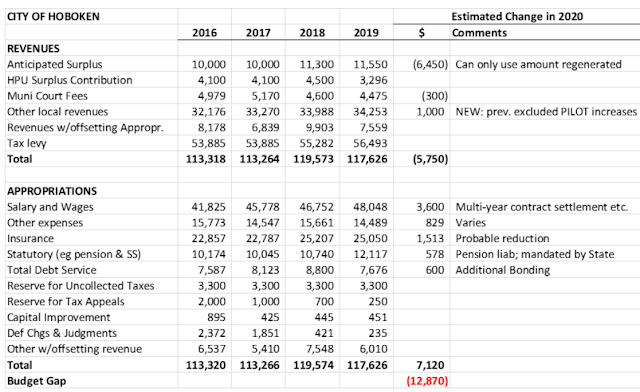 As I have stated previously, every year I have asked the administration to prepare a five year forecast for the city and each year I was told that they couldn’t do this.  I learned last week that the administration has finally taken steps to prepare one although to do so, it has hired an outside consultant.  I personally am surprised that this is required and not something the administration can prepare on its own.  IMHO this analysis is something that we should always have as a tool that helps drive the policies of the city.
As mentioned last time, filling any size budget gap can come from a variety of sources including reducing operating costs, layoffs, increasing revenues and increasing taxes.  All of the above is being considered.  We are also working with Freeholder Romano and the County to determine what, if any, support and/or sharing of services the County can provide to Hoboken given the high amount of County taxes we pay.   More to come…

RAILYARDS DEVELOPMENT PLAN
UP FOR VOTE AGAIN, THIS TIME ALL COMMERCIAL
Two weeks ago, the City Council voted 9-0 to introduce the revised Hoboken Railyards Development Plan.  This revised plan returns the project back to being a commercially anchored project at the heart of Hoboken’s business district.  You can read this informative summary for the changes that have been proposed.
I feel that this plan is significantly improved vs. the previous plan given that the focus will be on commercial development.  Additionally, based upon some feedback we received from members of the public, some late changes were made to the plan that ultimately allows for better future conversations about the public areas around the terminal.
As a reminder – this is just a plan.  Not an agreement to build.  Once the plan is approved the administration and the City Council subcommittee will work closely with all parties on a developer’s agreement for the actual developments so there will be more opportunity for public input along the way.

PARKING REPRICING CONTINUES
2nd Reading Tonight for Parking Meter Increases and Reduced Residential Parking Permits Rates for Seniors, Vets and Disabled
Tonight will be the 2nd reading and public hearing for the proposed increase to parking meters in our Business District.  The policy objective to this is to raise prices to incentivize turnover over parking spaces – in particular those who feed the meter and park all day – but not too high / too fast to discourage people from coming to Hoboken.  The increase will be from $1 to $2 per hour.  You can read which locations in the two ordinances here – 2 Hour Parking Locations and 4 Hour Parking Locations.
Additionally, last week we approved the increase in residential parking permits to $1/wk.  Tonight we will be voting on second reading to reduce this to $.50/wk for Seniors, Vets and Disabled.
MONARCH UPDATE
On January 22, the NJ Supreme Court heard oral arguments on the final legal complaint concerning whether or not the proposed Monarch development could be built on Hoboken’s northern waterfront.  The Supreme Court has the choice whether or not it wants to review appellate court decisions, and about a year ago it chose to do so in this case.  At the crux of the issue is whether or not public safety concerns trump constitutional property ownership rights.   Given the weight of this issue and the precedent setting nature, a representative for the NJ League of Municipalities also presented arguments (in our favor).  We await the court’s decision.  Fund for a Better Waterfront did a great summary from the day of the oral arguments.
What does this mean – IMHO it means either we continue with our negotiated plan with Applied if Hoboken loses and the NJ Supreme court upholds the appellate court’s decision or we won’t need to in the event Hoboken wins.  Under our current plan, we are already effectively paying full price for the monarch site, so losing in the Supreme Court shouldn’t result in us paying a higher price than what it is valued at.
Meanwhile, progress continues on the settlement plan which is still on track.  The City is currently doing a space assessment for the DPW garage which will be at the base of the proposed development.  More to come…
TRANSPORTATION ALTERNATIVES UNDER REVIEW
Over the past couple of weeks, the administration and my Parking and Transportation committee have met with a number of companies that operate in what I will refer to as the transportation alternatives space.  These include car, bike, moped, and e-scooter sharing as well as micro-mobility managers that provide various services including e-scooter impoundment to third party oversight of all micromobility programs.  I can tell you that we learned something from each conversation we had and will continue to have.
Here are some takeaways for each of the share categories:
ROAD CLOSED AHEAD SIGNS
This week I met with Police Chief Ferrante, Lt. Petrosino, Sgt Montanez, Andrew Impastato of the Parking Dude, and a member of the administration to discuss road closures.  More importantly the signage relating to road closures.  Coincidentally, during our tour of the various construction sites around Hoboken, we actually got caught at a road closed at 5th and Bloomfield where were stuck on Bloomfield being forced to turn east onto 5th and subject to the traffic light on Washington St.  Eight minutes later we finally got through.  We have all been there…
It was a great meeting and we agreed to a framework that would result in having detour and / our road closed ahead signs two blocks before any road closing so that a driver will have greater options to turn before the road closure.  HPD, which runs road closures, has already begun this practice, although there is a legislative requirement and coordination with other departments (engineering in particular) to ensure this practice is consistent and continues.
If you have felt the benefit of these signs, please email traffic@hobokenpd.org and let them know how happy you are!  We like to report the positive whenever we can.
15th STREET SAFETY IMPROVEMENTS
I am meeting with Kimberly Craft, our City Engineer, today to get an update on both the short and longer term safety improvements planned for 15th Street.  The immediate changes are reducing the width of the entrance from Bloomfield to 15thand the intersection of Hudson & 15th – this to be done with striping and vertical delineators.  I will also get an update on the planned 2020 construction improvements for most of 15th street which will also include pedestrian safety features.  I will report back with a further update.
LITTLE CITY BOOKS, BWE & PARK +BLOOM NOW OPEN UPTOWN
Going forward, with each newsletter I plan to highlight a local business.  This week I want to start with the recent expansion into Uptown of three Hoboken businesses all under one roof – little City Books, Bwe Café and Park+Bloom florists.  Located by the viaduct at 1405 Adams, this is a great little oasis that is worth seeking out.  Hoboken Girl did a great article on how this all came together.  Of note, both Chris Mazzola of Bijou Properties (landlord) and Donna Garban of Little City Books are on the board of the Hoboken Business Alliance, Hoboken’s new Special Improvement district.  So many great ideas about our local businesses happening right before our eyes.  And what you can do is go out and support them.

As always, please forward to anyone you think may be interested in receiving this.  Feel free to email me at hoboken2nd@gmail.com or call me at 201-208-1674 to discuss what youhave read or anything else that is important to you.