Hudco Hospital Crisis with Hoboken in the mix

Back in 2011, the one local hospital in Hoboken, the former St. Mary's now Hoboken University Medical Center reached a crisis. The red ink piled up and without state intervention aiding a new buyer the hospital would close.

At the time, the crisis became a political football as a local political faction eyed an opportunity to push for the hospital's closure to use as a political weapon against former Mayor Dawn Zimmer.

St. Mary's hospital was saved with a $55 million bond guarantee underwritten by the City of Hoboken in 2006. In 2011, an effort to identify a buyer saved it from closure in the darkest days.

Fast foward to the present and the current owner and buyer, CarePoint Health is opting out of the business from its private ownership model of three hospitals in Hoboken in Bayonne and Jersey City.

The Hudson Reporter detailed the developments.


At the center of the crisis is CarePoint Health, which has dissolved and has been liquidating its assets. That includes selling BMC, Christ Hospital, and Hoboken University Medical Center (HUMC).
In October of 2019, CarePoint and RWJBarnabas Health signed a letter of intent, whereby Christ Hospital and HUMC will become part of RWJBarnabas.
For the complete details, please see the Hudson Reporter story: https://hudsonreporter.com/2020/02/15/a-letter-a-meeting-and-three-hospitals-in-crisis/ 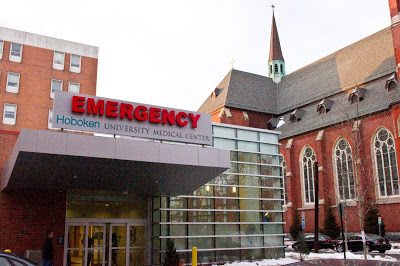 Posted by SmartyJones at Tuesday, February 25, 2020