Late today the mayor's office reports there are 19 cases of the Chinese Communist Party Virus in the City of Hoboken.

Among four new cases: one male in his 20s, two males in their late 30s and one woman female early 60s. All those in Hoboken struck by the virus are expected to recover.

The virus has been predominantly striking men. It also leans significantly to blood type A positive.

President Trump today announced 10,000 doses of a fairly inexpensive malaria drug are being provided to New York where the largest number of cases are reported. New York City totals over 5,000 and the entire state is at 8,000 dwarfing New Jersey's figure of more than 1300.

All the Tri-State figures are expected to rise.

Social disancing (physical proximity) of six feet from others is recommended at all locations whether it's the waterfront, a street or the local supermarket. Act accordingly.

Talking Ed Note: Today, the nation of Italy has suffered its most horrific losses. In addition to 1,000 deaths in the last two days, today there are 793 reported people who died today in the pandemic.

Most of the media in the United States have feasted working feverishly to put the worst light on the situation and President Trump. Although he acted in January imposing a never heard of Travel Ban against Mainland China and all those who had traveled there in early 2020, the focus is to politicize and misinform at every turn. This has perpetuated a mass psychosis witness the insane run on toilet paper.

If you claim to care for others, hoarding is not the way to demonstrate it.

China has been joined by Iran and Russia in exerting maximum propaganda force internationally claiming the United States Military is responsible for the creation and spread of the Wuhan Virus.

As the United States continues its national emergency, those who spend more time repeating Fake News and international propaganda disseminated on social media and TV nationally should think twice before doing so and look for more constructive, objective sources of information.

The CDC has solid information but that does not count the WHO (World Health Organization) which has fabricated facts out of Red China. Earlier this year, the WHO claimed there was no human to human transmission of the Chinese Communist Party Virus.

It's one of the major whoppers they executed aiding and abetting the coverup out of Red China over months since the first case was discovered in Wuhan back in mid-November.

Last, statistics out of Red China and Iran should be discounted. No one believes them.

Related: Evidence of the possible origin Red China's Wuhan's Level 4 facility being the source of the virus:
https://www.theepochtimes.com/heres-why-the-ccp-owns-this-pandemic_3279720.html 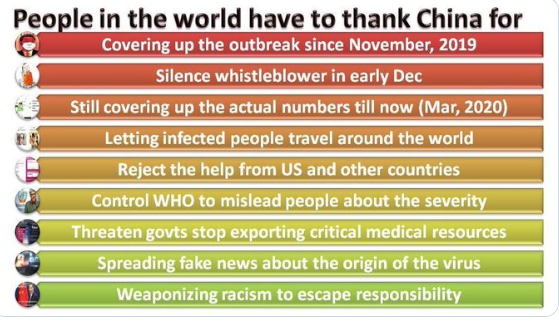