NJ.com reports the latest climbing figures for the pandemic as the US now tests more than 100,000 people a day. 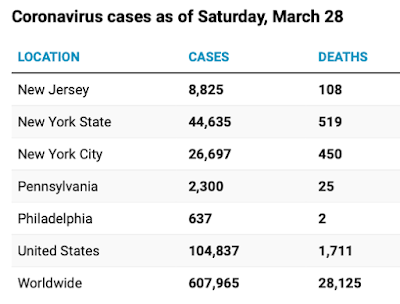 
27 new deaths, the largest yet in a single day, bringing the total to 108 residents who have succumbed to COVID-19.

Testing over the last 48 hours reveals 90% and 86% of people are testing negative. But in areas like New Jersey, those figures are upside down where nearly a third are testing positive.

As data is collected, pre-existing conditions show diabetes and pre-diabetes as one particularly vulnerable population. The US has a very high level of diabetics due to lifestyle and diet.

The US is targeting 100,000 ventilators for production. Those unused are planned for nations like Italy and the United Kingdom

Thousands of ventilators warehoused in Edison, NJ were made available for New York but not taken and distributed to New York City hospitals revealed by President Trump in a Friday briefing.

On the medical front, a physician in France reports a second battery of patients show the benefits of combination therapy, hydroxychloroquine and azithromycin. Both are inexpensive drugs now being used widely by doctors inside the US and around the world.

1. The effectiveness of our protocol, on 80 patients.
2. The relevance of the combination of hydroxychloroquine and azithromycin, thanks to research carried out in our P3 containment laboratory.