This is not a drill. As the New Jersey numbers of the novel coronavirus officially hit triple digits in New Jersey; Governor Murphy is calling out the National Guard who he says will "assist in our efforts in anyway necessary."

The spreading coronavirus, originating under the auspices of the Chinese Communists who covered it up since the first case mid-November is the new reality as tougher measures are going into effect. 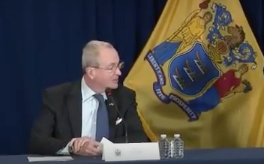 See NJ.com for the story.

Talking Ed Note: Does that comment about the National Guard sound somewhat ominous?

Related: Germany joins more than half a dozen EU countries in shutting down its borders.

Canada reversed its position Friday and followed with a similar announcement of its own.

France and its orders to stay home was breached as good weather tempted people to go out.

Italy reported a massive increase in infections with almost 4,000 new cases and almost 400 deaths in a 24 hour period. They are not seeing much of any support from their EU partners.

Does anyone know if either of the top Democrat candidates reversed and announced willingness to finally support  the travel restrictions set early this year by President Trump saving many American lives?

Joe Biden continues to criticize President Trump's travel restrictions saying it will not stop but only "slow" it. Well, duh. It's so hard to let go of the political mantra this is a "war against immigrants" as Senator Chuck Schumer tweeted: 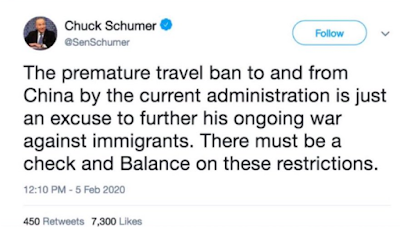 Meanwhile, the Chinese Communist government under fire for its clampdown on the residents of Hong Kong only months back is on a propaganda push to stop any negative reference to its actions that launched the pandemic.

Red China is blaming the US for their coronavirus and how quickly the brave protestors of Hong Kong are forgotten.

Comrades-in-arms are leading the way paying off the WHO and Western media flacks praising China for its efforts and decrying critics as "racist."

How's that globalism working out?
Posted by SmartyJones at Monday, March 16, 2020