The following is a guest submission from the Hoboken Municipal Supervisors Association.

The Hoboken Municipal Supervisors Association has sent a 59 page letter to the New Jersey Commissioner of Civil Service accusing Mayor Ravi Bhalla and his administration of negligence for the handling of pending layoffs. Weeks prior to the local COVID-19 outbreak, 79 city employees received layoff notices as a direct result of an alleged multi-million budget shortfall which preempted the pandemic. On April 17, the administration announced in a Nixle alert, the city would eliminate 26 positions and lied to Hoboken taxpayers by exploiting COVID-19 as as an excuse to proceed with layoffs.

The Hoboken Municipal Supervisors Association has identified over $111 million in the Open Space Fund, which prior to August 2019 was just $8 million. All of this is outlined in an April 22 letter addressed to the New Jersey Commissioner of Civil Service, which can be found in the attached link.

“It is our firm belief that the layoff list presented by Mayor Bhalla was contrived, orchestrated and planned to target individual employees,” said Dawn De Lorenzo, President of the Municipal Supervisors Association. “The Hoboken City Council recently passed a measure asking the administration to suspend all layoffs until a budget was submitted for review, but instead the Mayor has ignored this directive to protect the jobs of his current political appointments with the long term goal of giving tax payers jobs to his other political allies. A number of our members are being forced into an early retirement at a time when their institutional knowledge of city operations is so desperately needed to keep Hoboken running efficiently. None of these people deserve to feel like they are being punished and treated like a piece of garbage and that is exactly what this administration is doing, tossing them to the curb.

“I cannot sleep at night because I'm constantly worried about my members. I take all their pain and suffering to heart and I wish I could say the same for the Mayor and his administration.” 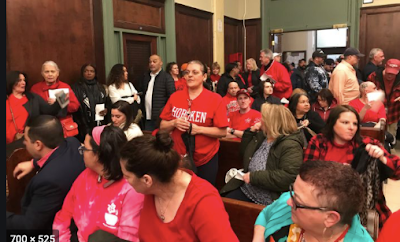 Related: The Bhalla Administration responded negatively as Mayor Ravi Bhalla combined his $12 million dollar budget deficit with the pandemic impact that followed as a reason for layoffs as reported on Hudson County View.

Posted by SmartyJones at Wednesday, April 29, 2020