As it stands at present Hoboken is at 167 cases with two additional deaths bringing the total to four.
Two seniors in their early 70s are reported as the victims.

34 cases are reported now as "recovered" as most cases are anticipated in the future.

Hoboken's cases in the majority fall within the younger demographics: 31 to 40 and 17 to 30 respectively. 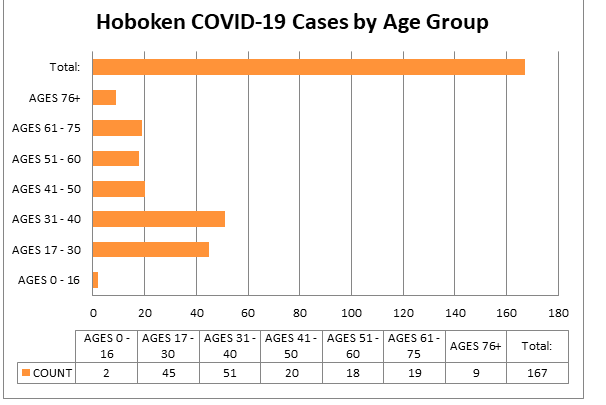 The City of Hoboken has released their daily update regarding COVID-19, indicating they now have 167 cases, two new deaths bringing their total up to four, 32 patients fully recovered – along with other relevant statistics.

Nj.gov reports: 34,124 cases statewide and 846 deaths across the state of New Jersey.

Talking Ed Note: The news is not expected to improve in the near term as the impact is anticipated to be strong over the next 7-10 days.

29 millions doses of the hydroxychloroquine (HCQ) drug used with Zpac and in some cases zinc have been stockpiled and is being used by doctors across the US and around the world to some positive outcome.

The effectiveness of the treatment is best applied before patients are intubated and have reached a more difficult status.