In a Sign of the Times, as the public begins to put two and two together the Chinese Communist Party virus is a serious threat to seniors and those with underlying illnesses, an indicator is expected to come in Hoboken on reopening parks.

As reported yesterday, the drastic flattening of the curve in Hoboken to single digits in new cases among the official population of 55,000 is leading to increasing public pressure to allow use of some parks.

While many Hoboken residents have left to sunnier places to tide through the pandemic, those here especially with family are demanding in ever larger voices to allow use of the parks with their kids, the statistically safest population.

Later today, Mayor Ravi Bhalla who earlier insisted on a regional park reopening plan with other HudCo mayors is expected to relent and finally allow the tape to be taking down blocking use of at least some Hoboken parks.

As hospitalizations, a key pandemic indicator across New Jersey continue to dive, the inevitable reality is the public will not be chastised into an endless cycle of FearPorn.


Yesterday, it was reported here that sunlight is a key weapon against the CCP virus killing it in as little as 90 seconds.

A separate study points to the risk of transmission in public to be in the very low single digits. Which means if you are outside and not "hugging it out" with every other person in the neighborhood, or trapped on public transportation, transmission is very unlikely.

Fully 80-85% of people who are infected with the virus are not in danger of serious health concern or hospitalization borne out by the mortality data in Hoboken.

Of the 23 deaths in the Mile Square City, almost all fall in the category of seniors with only two falling below that benchmark. 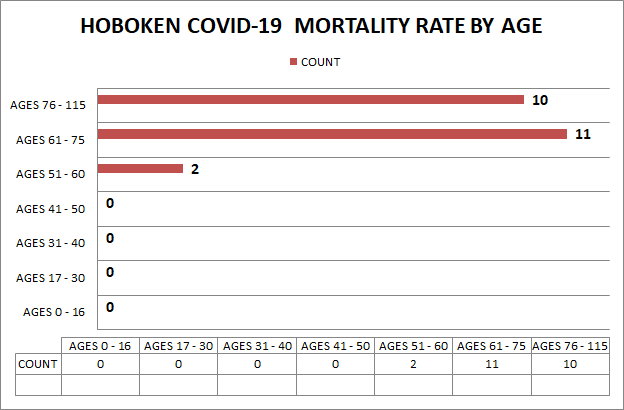 Talking Ed Note: If Mayor Ravi Bhalla follows through with some park reopenings after the growing dissent highlighted here yesterday, let's greet it with applause. It's welcome.

News 12 reports the State Police called the weekend a success for those state parks reopened.
Posted by SmartyJones at Tuesday, May 05, 2020