Pupie Power back in Hoboken

Although anticipated by insiders with an original release date of June 1, Frank "Pupie" Raia was given an early release from his three month federal prison sentence for directing a fraudulent Vote-by-Mail pay operation in the 2013 Hoboken election today.

The release comes a full week earlier than some insiders expected due in part to the Chinese Communist Party virus.

Convicted of vote-by-mail fraud in connection to the 2013 municipal elections back in June, Hoboken politico Frank Raia has been released from prison and will serve about three weeks of house arrest following a judge’s ruling earlier today.


Talking Ed Note: Pupie skates with a lighter sentence of about two months, itself a bit of good fortune due to the good he's done for many in Hoboken not connected to elections in 2007, 2009, 2010, 2011, 2012, 2013. He potentially faced up to five years in federal prison but a letter writing campaign in town earned him justifiable sympathy from the judge.

Having covered his trial and seen the condition he was in, his suffering began long before his conviction and sentence began.

More on this with members by email but here, I'll wish him and his family well. He paid a price for his crimes.

Correction: According to the tracking here, Raia was actually officially released on Thursday.
Source: Federal Bureau of Prisons 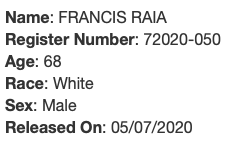