Bhalla's brother Amar is thought to be working for the George Soros funded Open Society Foundation in New York City. Some have speculated that his brother played a role in bringing the controversial protest to Hoboken during the pandemic as the Mile Square City remains in near lockdown.

While that detail is unconfirmed, the BLM student organizers come from outside Hoboken and oddly have selected the northeast part of town far from the PATH and Pier A which would seem a more natural venue selection.

A number of local Hoboken businesses and residents are alarmed at the planned protest with some already voicing dissent and others making plans to board up their establishments for Friday. Still more are asking about the related security costs with the Hoboken budget deficit estimated currently in the area of $20 million.

Some New Jersey protests after the grisly killing of George Floyd in Minnesota have fared well, most recently in Jersey City yesterday where no violence occurred after the event. The New Jersey capital of Trenton is among those that did not.

A release on City of Hoboken letterhead and the Hoboken Police Department is published in full below. 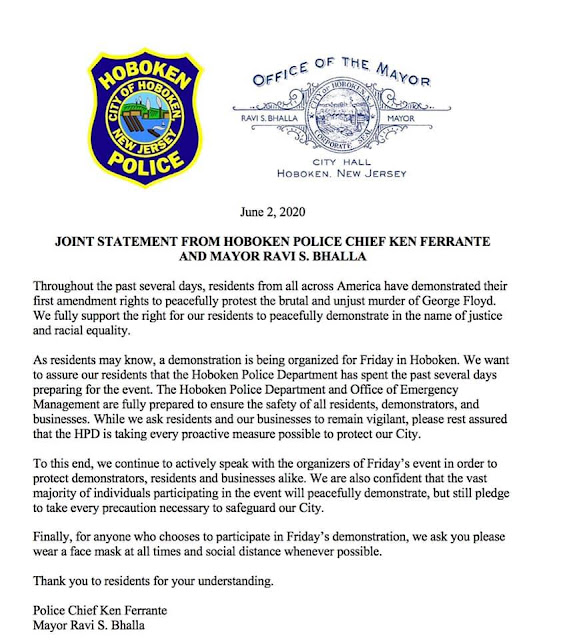 Talking Ed Note: For the record, some people are voicing their opinion in the comments section and I don't speak for them and have no role in their comments. As long as people don't break the simple rules, they are allowed to voice their opinion which are theirs alone.