Hoboken is in the spotlight in New Jersey last Friday hosting the biggest protest statewide in recent days and the entire city has reason to be proud. 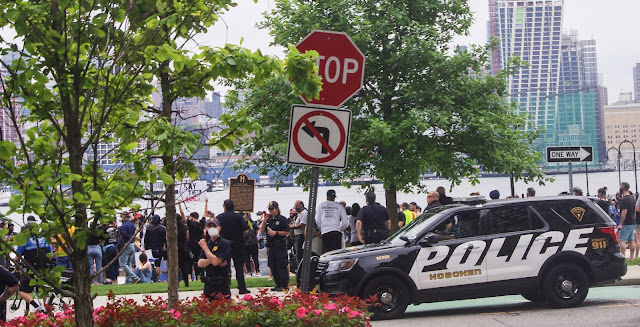 An estimated several thousand people came to Hoboken encouraged by Democrat politicians for the first time in months to go outside during the pandemic with their full approval to protest after George Floyd's murder appeared on video in Minneapolis last month. Universal condemnation followed and led to the arrest of the police officer most visible, hit with a murder charge.

A sole incident of violence in Hoboken on Friday reportedly occurred when one protestor punched another in the face. Not bad considering how long people have been locked away during the pandemic. Much was transpiring behind the scenes however to deliver those almost perfectly peaceful results.

More than a dozen law enforcement agencies at all levels were working with the Hoboken Police Department in tandem with state officials to give the protest the highest likelihood of success. In NJ, there's been a disparity between peaceful protests and those degenerating into rioting and looting. Newark's recent protest came out on the plus side but Trenton did not with the latter reportedly seeing an estimated 1,000 people engaging in rioting and looting.

Even as the the protests in Hoboken last Friday became splintered with hundreds breaking off from the officially sanctioned route down Sinatra Drive to Pier A and landing on Washington St. where many businesses had boarded up, no violence occurred.

On Hudson Street, a group of marchers heading south began a chant cursing the president revealing the political underpinnings of the protest with local and state politicians eager to grasp on to the emotional outpouring for their personal benefit. No one from Mayor Ravi Bhalla to HudCo and the governor's office issued any warning or concern advising protestors there could be a negative health impact to them and others with the ongoing pandemic.

This ironically comes after earlier public protestors only days prior against a continuing lockdown were condemned as murderers and racist. The only difference in the protests were the former were out in far smaller numbers, often focused on state capitols and prominently featured American flags while the protestors in recent days are backed and underwritten by the political entities seeking maximum control over citizenry they control with an eye on taking complete power in DC after the November election.

As for the protest staged Friday in Hoboken, officially, the student organizers, all women connected under a group calling itself allies4justice do not endorse violence. One of the official organizers who was in talks with Mayor Ravi Bhalla to see him featured as a speaker did not show up in Hoboken. The photo below may offer some clues as to why.

The message on the wall posed in tandem in the picture is perfectly clear. "Refugees welcome" meaning support for the radical leftist plank of "Open Borders" embraced as a staple to see the current population of Americans overrun and subsequently forced into the political wilderness when supplanted by new "refugee" voters. Of course any opposition to this core plank is deemed "racist" and the "A" above in the photo does not stand for America.

It's the symbol for Antifa, the violent anarchist group pushing for destruction of the United States, the Constitution and its related governmental bodies ostensibly to be replaced with a communist totalitarian entity to be named later, of course proclaiming "justice." Its members have been revealed in groundbreaking reports ignored by most of the lockstep major media. The undercover reports show Antifa members training in violent tactics with a defector confessing to some of their underground recruitment methods and its New York chapter instructing on how to do maximum physical harm to deemed opponents.

This was in the backdrop of major concerns for local law enforcement, the Hoboken Police Department and numerous agencies at the state and federal level who were prepared to take on the threats. Those threats were very real and some intel collected here was shared with subscribers last week.

As the First Amendment stood tall with the Hoboken Police Department last week, the Mile Square City has major cause for pride and to salute its police who executed in a very difficult, complex and dangerous environment.

Give them a thumbs up but please, ask them to take a bow but not a knee.

Speaking of taking a knee, it's unclear where this downtown video originated. It was discovered on Twitter and is not a Hoboken Horse or Giant Video of the Day. It features NJ State police.

So inspiring to see a Police officer refuse to bend the knee & submit to the mob👏
This illustrates the difference between a hero and a bunch of cowards!
RT if u agree this brave man is owed a debt of gratitude🙏#DefendThePolice#AllLivesMatters#KAG2020pic.twitter.com/WtH1JSFefd
— 🇺🇸Kirk🇺🇸 (@Kirk_925) June 7, 2020

Talking Ed Note: For those who participated in the Hoboken protest, Mayor Ravi Bhalla is urging they now be tested and enter into quarantine. With the incubation period of five to fourteen days, that's potentially a lot of people and includes the entire Ravi Bhalla family.

Who thinks they will?