Why is Hoboken Girl inviting a protest into Hoboken during a pandemic?

Analysis: Hoboken Girl blog is fine with adding to Hoboken's pandemic death toll of 29 and counting

For those residents reading this, it will come as quite a shock to learn a local website is promoting a protest in Hoboken this Friday against the very real science of an ongoing pandemic.

Let's be more blunt, it's shocking for the stupidity exhibited during an actual and very real pandemic.

The Hoboken Girl blog is promoting this hot mess for Hoboken's Maxwell Park this Friday.

Does anyone know if this Hoboken Girl blog is officially charged to overwrite US national policy CDC guidelines during a pandemic?

Did Dr. Deborah Birx and Dr. Anthony Fauci resign and anoint Hoboken Girl to advise on US pandemic policy in their place?

Wasn't it only days ago when people protesting in front of the state capital in Michigan were called suicidal, reckless, devastatingly worrisome, racist and dangerous?

Well, perhaps Hoboken Girl decided flaunting her virtue signaling SJW credentials in promoting this protest is more important than science during an actual pandemic not to mention the health and welfare of Hoboken residents. Or perhaps she's but a puppet for others in the Hoboken mayor's office pulling her strings.

What should the Mile Square City anticipate but dread? Nothing good based on the hardcore violence following the actions of "protestors" in many places across the country in recent days. There's clearly zero common sense on hand as Governor Murphy has not authored any change to his existing pandemic state policy in New Jersey encouraging reckless life-threatening protests.

The Hoboken Girl blog is joined by others elevating themselves overriding any CDC pandemic guidelines. Because when lives are on the line, it's a political agenda over science that matters. Enemies foreign and domestic coupled with obtuse stupidity comes to mind.

There's a Twitter account calling themselves "G" promoting this event sporting a Black Lives Matter logo, the group led by far left radicals and funded by George Soros to the tunes of tens of millions of dollars.

The twitter account is followed by Hoboken far left anti-car activist Ron Bautista who is certainly not an advisor or employee of the CDC in any pandemic science whatsoever. He's joined in offering to help spread the virus here. 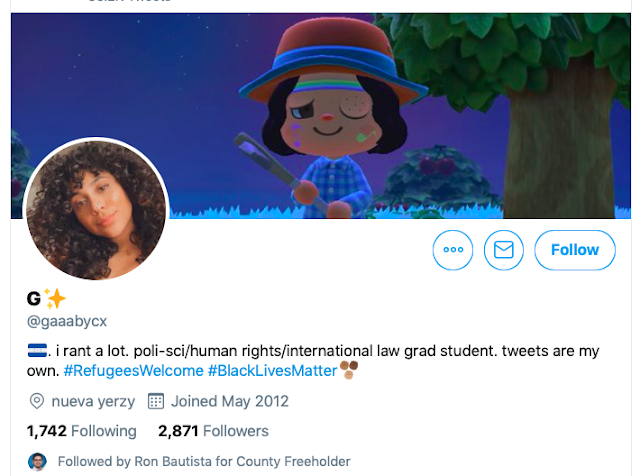 Why would Hoboken want to host a protest during a pandemic?

Examining the why of this misguided foolishness would also require a deep dive and professorial examination of how radical Leftists seek to destroy the US economy and open the doors to further anarchy and chaos. It's not just for armchair revolutionaries anymore. Wokeness is here.

Are there Hoboken police problems with citizens here? No, there is not. Hoboken has an excellent track record of police-community relations in recent years. You can search for news of any police problem with Hoboken residents and come up completely empty.

So why is the Hoboken Girl website promoting this protest here and during a pandemic no less? There's awareness by local political observers of a close family connection to the mayor's office for several years but most Hoboken residents are likely unaware of that intimate history.

Does Mayor Ravi Bhalla sanction this radical backed protest which contradicts his official health policy statements to Hoboken residents to limit the spread of the virus during a pandemic? Would the underlings in the mayor's office with their direct connections to the Hoboken Girl blog be acting against or in concert with Ravi Bhalla?

That's the pending multi-million dollar mayhem lawsuit in question. Lawyers want to know and are standing by.

Hoboken Girl should be ashamed of herself. Why doesn't she go invite a pandemic-laden protest to her New Jersey hometown?

Hoboken doesn't need this political and health vapidity during a pandemic. Some are just ignorant dupes easily manipulated by others. None of this is occurring in a void. This is an organized and well-funded plan. Now it's looking to come to Hoboken.

Historic St John's Church in DC is burning
Seth Rogen, can you bail out the protesters responsible for this. @Sethrogen pic.twitter.com/KtDPW77oSr
— BenFranklinSon (@BenFranklinSon) June 1, 2020

Stephanie Wilford, a south Minneapolis resident, describes how the damage from riots has affected her, and others in her community.pic.twitter.com/M3iuARTL6b
— FlynnWasFramed.357⭐️⭐️ (@ASimplePatriot) May 30, 2020

Rioters in Minnesota blast audio from The Purge on a loud speaker: “Any and all crime, including murder, will be legal for 12 continuous hours.”#BlackLivesMatter #antifa #GeorgeFloyd pic.twitter.com/3h8zSLNMTS
— Andy Ngô (@MrAndyNgo) May 29, 2020