Horse Sense: "Something is not right"

Last night began the oddest Democrat convention in living memory. Gone are the signs popping up and down with names of states by selected delegates and old school speeches cheered by fans chosen through primaries actually won.

In their place, a remote convention maintained with a pandemic that is ordered to stay in place no matter the declining cases and more importantly the declining hospitalizations and deaths nationwide. Do it for Joe and keep the candidate rested and safe in his basement.

If you don't think this is about the election, then you're probably a registered Democrat or one of their acolytes who are enjoying this time of the season where "the Purge" is not a fanciful fantasy movie but an equal opportunity program in Democrat-controlled cities where burn, loot and mayhem are the watchword. Catch and release y'all! Portland, Seattle and Chicago, represent!

Get caught for felonies, smile for the camera and then be on your way. Guilty as hell, free as a bird to do it all over again. But hey, let's not waste internet pixels on Obama's old friend, Billy the Bomber Ayers.

Domestic terrorism is no longer a political extreme shunned by both major political parties. Today, it's a political tool to divide and extort Americans for votes. Don't vote for us, well, we're going to unleash our black-shirted paramilitary mobs on you. It's all the rage in the next episode of "No justice, no peace" defund the police "movements" for the 2020 election.

Perhaps Americans aren't noticing this insipid coordination to extort them using fear for their votes or similarly for a mostly passed nursing home disease pandemic but what's a white Leftist have left in the playbook?


For Joe Biden, he of a Ukraine extortion confession on video and decades long member of the US Senate and the Swamp, all of this must appear like a passing mirage. (The Democrats won that round by initiating a sham impeachment to shut down billion dollar corruption chatter and the damning video evidence.)

Joe Biden's series of career gaffes have long made him a laughing stock in DC. Years earlier, he had to drop out of the 1988 presidential race for plagiarizing a UK Labor leader's speech.

Those however, were the days when some accountability could be expected and voiced in mainstream media prior to that caste system choosing to act as out and out political operatives for the Democrat Party. Need a "fine people" Charlottesville lie or Russia Collusion Hoax to perpetrate against the American people, we're in Michelle!

As some may recall, it was on these Horseyland stable pages where the Russia Collusion Hoax was deemed a hoax - back in 2016! How do you like your ObamaGate now?

Ask Kevin Clinesmith, the senior FBI lawyer under James "Cardinal" Comey and "Vive La Resistance" email fame who actually changed an email to frame Carter Page, a true American patriot. He acted likely with others to obtain a falsified FISA warrant, powerful to the maximum, allowing "legal" spying on both the Trump campaign in 2016 and the actual Trump Administration well into 2017. He's the first guilty plea in the SpyGate saga and not because he told authorities he had orange not grapefruit juice at the wrong breakfast.

Describing his observations, Jackson said, "the best way I can describe every time I see him is that he's just lost." Now a GOP congressional candidate in Texas, the doctor added, "I won't make any particular diagnosis about dementia ... but what I will say is that something is not right."

There's actual reason to fear. Not over the Russia Collusion Hoax, or another insane conspiracy ruse about the US Post Office to see legalized massive voter fraud in states, or the fading Chinese Communist Party Virus pandemic; but who the puppet masters behind Joe Biden actually are. At least one senior campaign advisor is a well known disciple of Mao, the leading mass murderer of the 20th century. So much transformation to do, so little time.

Be afraid, America, be very afraid, especially you Joe. 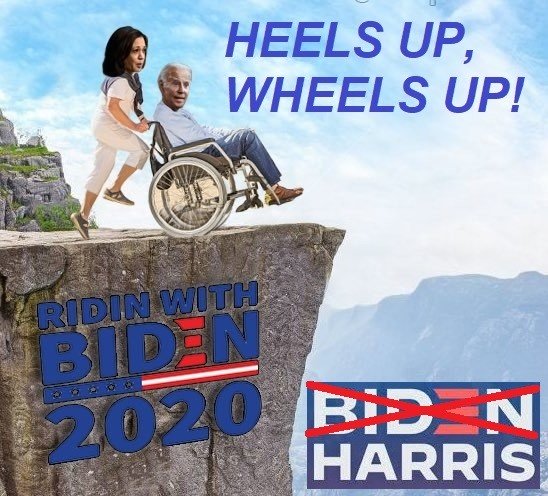 This Horse Sense editorial is dedicated to Your Royal Highness.