The Hoboken mayor Ravi Bhalla balked seeing the Center for Disease Control (CDC) recommendation against testing for people without symptoms even those who may have been exposed to the Chinese Communist Party Virus.

Maybe he wants to be called Dr. Ravi?

In tandem with the recommendation, the CDC also admitted of more than 170,000 reported deaths due to the virus, less than 10,000 have turned out to have died as a result of only the novel coronavirus itself.

The CDC admission means the vast majority of deaths, fully 94% are connected to victims who suffered from one or more underlying illnesses, primarily among the elderly.

The news was not met receptively by the Hoboken mayor:

The public reaction in Hoboken, outside of usual Ravibots was largely hostile. One respondent noted being a politician doesn't make you a physician.

Another noted how "listen to the experts" works with power-seeking politicians.

Another suggested it's time for Ravi Bhalla to take a scooter ride.

The criticism didn't end there. 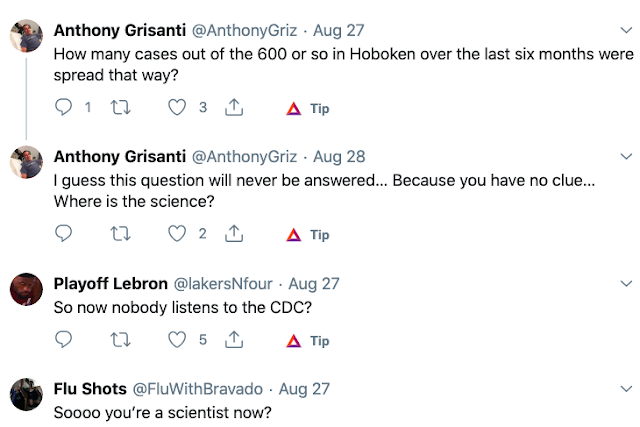 
And so it goes. Hoboken latest report again shows less than a handful of new cases including two in their late teens, a population most likely not to see a sniffle from the virus.