As predicted here yesterday, the effort to impose a $250 fine for anyone caught outside in Hoboken without wearing a mask was crushed in the City Council last night.

The totalitarian focused, non-science based Mayor Ravi Bhalla proposed ordinance cheered by his "Army of Karens" failed in a crushing 6-3 vote.

Among the varied arguments on both sides, no scientific data or study was ever cited by Ravi Bhalla as a reason for the proposed mask fine.

Bhalla's reflexive council backers also failed to explain why such an austere measure should be imposed on the public after the pandemic has mostly passed and area hospitals are all but emptied of infected patients suffering from the novel coronavirus.

There's been no explanation why this Hoboken survey, unlike almost any in the past decade that typically run over several weeks or longer was cut short in less than a day.

According to a release yesterday by the mayor's office, a slim majority of Hoboken residents responded in favor of the measure.

The City Council however did not go along with the deigned manipulations. Only Phil Cohen, Emily Jabbour and Jim Doyle of the nine council members voted in favor of the face mask fine.

Some council members noted the overwhelming backlash from the Hoboken public with up to a 90% negative response rate.

Among the reasons by the Hoboken public: the lack of logic to do so with the pandemic mostly passed through the region and questionable enforcement action.

Ravi Bhalla proposed putting municipal officials into the role of issuing tickets, people critics noted, who answer to him.

Many of those critics saw the Bhalla proposed ordinance as a step toward violence or equally bad, a town of Karen Stasi, where neighbor would spy on and report on neighbor if seen outdoors without a face mask.

Others pointed toward the likelihood of abuse with political targeting of Hoboken people who differ with Ravi Bhalla. That criticism is not without precedent.


Talking Ed Note: On the City of Hoboken page, while some among the "Army of Karens" wailed over the Ravi Bhalla mask fine's failed passage, other members of the public under their own names decried the "Nazi-like" effort with logic and harsh criticism.

At least one called for Ravi Bhalla's arrest for his manipulative push poll, while a "Karen" countered by voicing her desire to mace anyone who doesn't wear a face mask outdoors. Horsey couldn't resist chiming in. 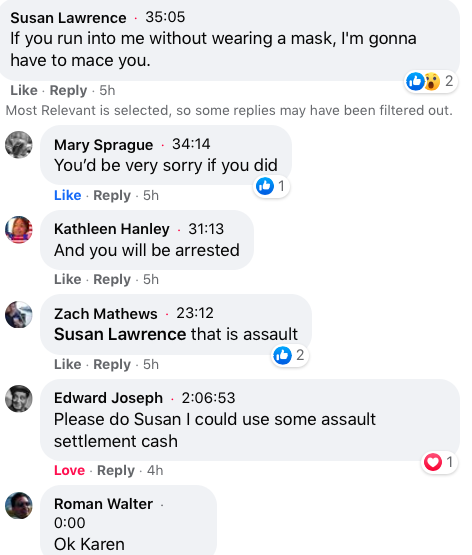 Related: The Hudson County View recounted the outrage from the Hoboken public during the City Council meeting last night: