Two Democrats and a President

Yesterday's presidential debate, if one could ascribe the event as such, featured Democrat Chris Wallace pretending to be the moderator in the sum of what turned more into a brawl.

A President Trump we've not seen before, more fluid, confident but highly contentious entered the cage match much as a UFC fighter. Take no prisoners.

Lots of interjections and roundhouse kicks and that was only what he delivered to his other opponent, Chris Wallace.

The novelty of last night's event beyond the Wild West showcased showdown was Joe Biden, looking every bit his age plus a decade more as he stood for the full 90 minutes, glassy eyed with pupils dilated more than a weekend ecstasy binger. Whatever drug cocktail brought him to the podium generally worked. He remained semi-coherent if weak overall but able to deliver a number of planned attacks plus a few spontaneous ones reviving with Chris Wallace the Charlottesville "Fine People" Hoax.

Biden in several instances attacked the President calling him a clown twice and more than once, racist. He resurrected a leftwing myth about a small, obscure multi-racial patriotic group called the Proud Boys which enters the People's Republic of Portland at times facing off against the extreme left fascist group ANTIFA. The former VP ignoring months of that group's rioting around the country called that organization an "idea," following a party line going back months earlier recited by Congressman Jerry Nadler.

On the issues of actual import, less illumination but on occasion some differences highlighted. The tax difference between the candidates accentuated with Joe Biden saying he would undo the Trump tax cuts and defended his planned tax increases in the trillions to be added over the next decade. The former VP would oddly claim Wall Street endorsed his tax plan. It was hard to distinguish obvious fabrications versus cognitive decline.

The emerging SpyGate or ObamaGate scandal illuminated with a letter yesterday from John Ratcliffe, Director of National Intelligence pointing to the Russia Collusion Hoax being a known Hillary Clinton campaign attack in 2016 to deflect from her illegal bathroom based email server. Democrat media immediately began an assault to dismiss the DNI declassification even as details are expected to surface.

In line with those revelations pointing to an organized spying effort involving the Obama White House and US intel agencies, President Trump would highlight his campaign was targeted in 2016 and add it began when he came down the elevator at Trump Tower. He repeated his earlier allegation of the illegal spying pointing to former President Obama and Joe Biden stating there was no peaceful transition, quite the contrary.

That moment is encapsulated for historians of the future here.

Watch a second time with the sound off and you can see Joe Biden visibly grimace but not mount a denial as he would later about the millions wired to his son Hunter Biden's bank account from Russians in Moscow. 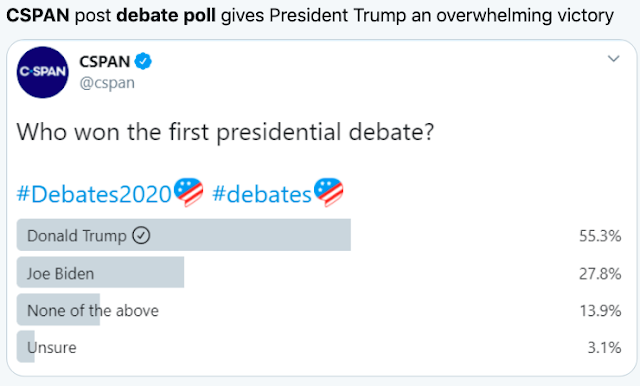 Talking Ed Note: Much of the fisticuffs will be in the eye of the partisan beholder. While the big Democrat media polls declared victory for Biden, two notably did not. CSPAN scored a big margin of victory for President Trump while Telemundo, the national Hispanic TV network scored it an overwhelming 66% to 34% victory for Donald Trump crushing Joe Biden. Does this foretell an untold story for November?
The more you know...
Chris Wallace entered with an objective to protect the Democrat candidate showing his party support. Well, who wouldn't want a little love on the big national stage?

This feature story dedicated to Spaceman, no matter the TDS infection, much love, much love.
Posted by SmartyJones at Wednesday, September 30, 2020