The worm has turned and karmic retribution for political projections in recent years have flipped the presidential campaign on its back.

Now, Communist China connections running into the many millions of dollars are coming to light.

Hunter Biden pursued lucrative deals involving China’s largest private energy company — including one that he said would be “interesting for me and my family,” emails obtained by The Post show.

One email sent to Biden on May 13, 2017, with the subject line “Expectations,” included details of “remuneration packages” for six people involved in an unspecified business venture.

The would-be Communist China energy deal indicates a potential score into the double-digit millions and makes initialed reference to multiple members of the Biden family including Hunter Biden, his uncle James and Joe Biden himself.

In the Communist China energy effort, Hunter Biden expected to make up to $30 million for introductions according to one international news story being suppressed in most of the national media inside the United States.

The Communist China energy deal would fall apart as one key business head disappeared two years ago and has not been seen alive since.

The newest bombshell comes on the heels of yesterday which saw the Biden campaign call another "lid" keeping Joe Biden tucked away safely in his Delaware basement and away from questions about the eye-popping revelations.

Among the newest allegations, Giuliani pointed out how tribute was kicked up to Joe Biden by his son Hunter. He alleged this in a recovered text message recovered from Hunter Biden's abandoned laptop.

The following exchange from Hunter Biden to his daughter was published late yesterday on Rudy Giuliani's website: 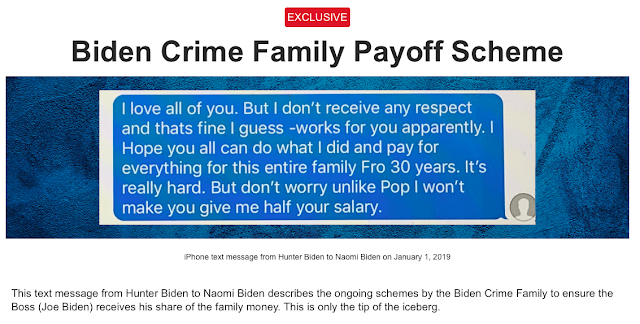 Talking Ed Note: After all the apparent projection about the Russia Collusion Hoax, the Mueller scam investigation to cover up those crimes and then the sham impeachment to cover up the Biden family crimes, the light is beginning to shine.

Yesterday, Twitter and Facebook both attempted to keep the news of the Biden Crime Family scandal suppressed and censored. Other corporate Democrat media are doing their best to keep the story out of the headlines now making news around the globe.

The amount of corruption, massive criminality and censorship is simply unprecedented. Your friendly neighborhood Horsey is happy to share with you here.

Posted by SmartyJones at Thursday, October 15, 2020