Dominion reeks more than the odor out of Denmark

Something is rotten in Denmark Dominion.
Some data analysts conclude there is after the Election Night data was analyzed in Michigan, Wisconsin and Pennsylvania.
Following the unprecedented shutdown in counting the votes in those states and Georgia followed by an upheaval in votes beyond a mathematical possibility, in some cases with six figures in "votes" registering only for Joe Biden and no other candidate on the ballot, Republican, Democrat or independent.
You don't need to be any data wizard to note the oddity some have captured during a CNN broadcast. There's a before on the official vote tally Election Night in Pennsylvania. Note President Trump's number at the time: 1,690, 589. 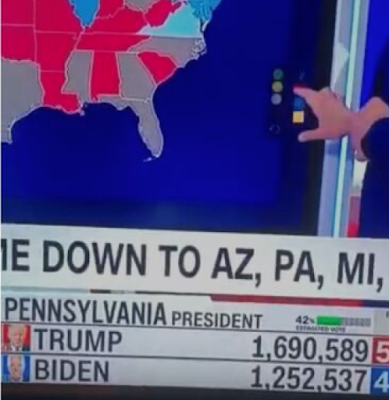 Then seconds later, this odd drop in the numbers for President Trump followed with the exact increase to the Joe Biden totals followed: 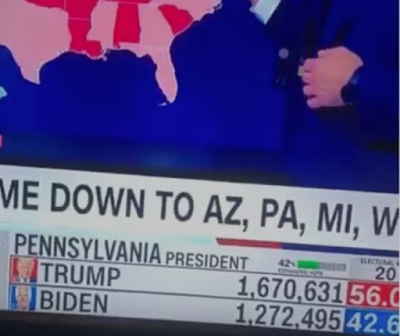 No big deal, just another one of those anomalies that had no impact to the election outcome?
How exactly did Donald Trump not only see an almost 20,000 vote gain strictly for his top opponent but an equivalent and simultaneous DROP in votes to his column?
Dominion Voting Systems is the point of origin in what we see above where the data was fed to Edison Research before being forwarded on to the New York Times and on air networks.
In almost an instant, almost 20,000 votes were taken from President Donald Trump and immediately were added into the totals of Joe Biden. The exact figure in this latest apparent "glitch" is 19,958.
The visually captured data switch impacted the race from Trump leading 56.6% versus 42.0% for Joe Biden to Trump 56.0% and Biden 42.6%.
Note, this occurred in addition and prior to the dead of night post 4:00 am paper ballot insertion.
The Dominion voting software with embedded code from Communist China and is rife with rumored connections to senior Democrats, to date denied and unproven.
But now more questions are being raised on top of the miraculous Festivus Vote by Mail ballots added in the dead of night without election observers able to challenge.
What if there was a dual track executed for aiding and abetting the paper VBM supplements?
Is this evidence of the electronic "adjustment" recognizing the prepared ballot stuffing would be insufficient?
Apparently, Rudy Giuliani suspects it is and stated as much claiming a Dominion whistleblower has stepped forward and cases filed on behalf of voters in Michigan and Pennsylvania is very strong.
Giuliani points to paper ballots being brought out in unsealed boxes from "the back" and witnesses hearing they were needed to overcome President Trump's lead which turned out to be larger than anticipated.
In addition, Giuliani references a whistleblower out of Dominion who was a contractor to work that day, adds more on being vetted and concludes there is no way Pennsylvania will go to Joe Biden who he describes as "a criminal.
Meanwhile, the corporate globalist Democrat media says there's nothing to see here, in non-transparent paper ballot stuffing in the dead of night past 4:00 am or in any current and upcoming legal filings on behalf of the respective state residents and the Trump campaign.
A banana republic would make this look more credible.
BREAKING 3:30 PM: A Pennsylvania judge rules any ballots added after the Election Day 8:00 pm deadline are illegal as the permission to do so offered by the PA Secretary of State is not valid.
Supreme Court Judge Samuel Alito ordered any such ballots be segregated after hearing guidance in the state of Pennsylvania was not being followed. Dozens of Pennsylvania counties ignored acting properly and declined to certify they adhered to the order.
Brace for impact!
Posted by SmartyJones at Thursday, November 12, 2020