Not a single day and the evidence of blatant election theft in Michigan and Wisconsin is piling up.

There's a variety of evidence coming to the fore and in Wisconsin, which showed a magical 138,000 bump in ballots at 4:30 am, there's more than cause for concern.

The magical ballot injection put the Wisconsin turnout with the no eyes on ballot dump to almost a whopping 90%. Milwaukee is the core of the problem, or rather, preparation. This was a ready-made operation set to go.

Call it an anomaly, 'wink, wink' or what you like. A recount is coming and a federal judge at some point is going to hear all the evidence with a manual recount request.

In Hoboken, longtime readers here, (there's been more than 15 million views since this website started a decade back) are well aware of the numerous stories here exposing election theft with voter fraud. I testified for well over a day in 2014 in Hudson Superior Court on my investigative work on voter fraud in Hoboken in an infamous rent control ballot question case.

After the exposure of Hoboken 2013 Vote-by-Mail fraud, the case was withdrawn by parties connected to the conspiracy. Convictions in Newark federal court followed last year.

In a similar vein, the Milwaukee Wire reported on the problematic matter of Milwaukee voting wards submitting more votes than available registered voters:

Seven City of Milwaukee voting wards reported more 2020 U.S. Presidential election votes than they had registered voters, according to an analysis of results and Secretary of State files.

Five of them are in the city’s eleventh aldermanic ward, on the city’s far Southwest Side.

Talking Ed Note: There's more coming out on this not less. It's becoming abundantly clear why Nancy Pelosi and her party wanted to inject the lethal election theft threat with massive unchecked vote by mail ballots. In tandem with the corporate Democrat Media and Big Tech censorship, this operation was rolled out with the intent of finding a path for Joe Biden to 270 electoral votes.

The operation of massive ballots dumps in chunks of 50,000 and more than 100,000 in the early am hours after poll watchers were told the counting operations would cease is no accident. It's a feature, a feature of planned election theft.

Arizona has now been taken off the board for the Biden campaign and the latest counts show President Trump is on track to a victory in reviewing the actual real votes of living voters in that state. Arizona will have an update later in the day.

Here's the updated and current trending Horsey Electoral Map with the election theft efforts failing. Georgia is now grayed out as its pending a recount under its state law and will be doing one as is Wisconsin. 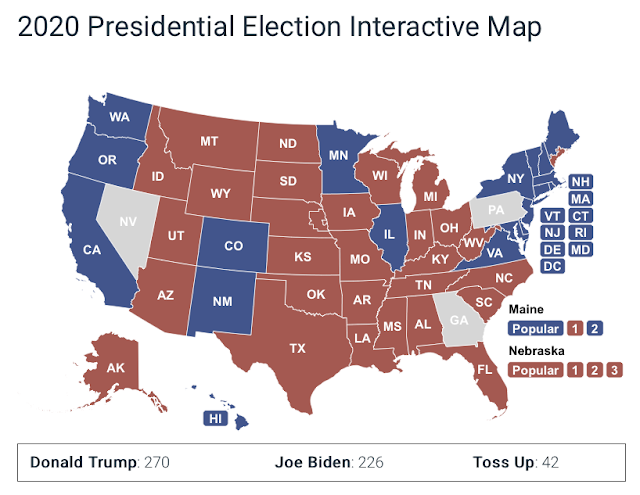 Posted by SmartyJones at Thursday, November 05, 2020