Grist for the Mill: Latest computer "glitch" puts Wisconsin on the brink?

Not a full week after Election Day and the Biden campaign victory announced by his partisan media supporters is imploding.

And a Twitter meme about its censorship and who actually won the presidential election is exploding: 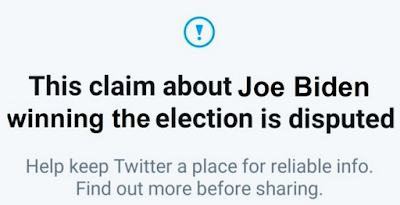 Yesterday, the Attorney General Bill Barr announced the Department of Justice would be looking into reports of "substantial" voting irregularities and now there's word of more computer "glitches."

This time it's Wisconsin where sources suggest a 19,500 computer "glitch." If confirmed, the impact would put the entire election along with half-a-dozen contested state tallies into doubt.

Is glitch the 2020 term for election strategy?

With the current differential in Wisconsin around 20,000 votes, a change in the unofficial tabulation would throw the entire outcome of the state and its ten electoral votes into doubt.

This latest glitch foreshadows an impact on Wisconsin votes from Rock County where tallies magically were inverted: 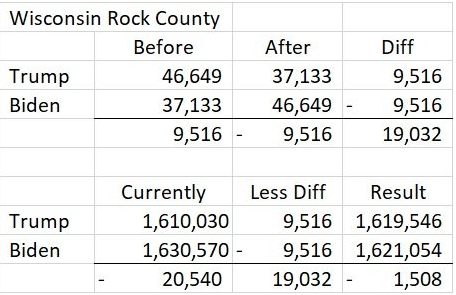 Any successive victory in Wisconsin for President Trump following his victory there in 2016 could mean he'd win the presidential election pending tallies in Arizona where Joe Biden holds a dwindling lead.

Georgia, Nevada and North Carolina are not confirmed but President Trump appears likely to win all but Nevada which is facing a challenge for numerous irregularities. Thousands of voters in Nevada are not actually residents of the state.

There's additional whispers about other computer "glitches" in Virginia and Pennsylvania. The problems with these glitches is they consistently show improvements to the Biden campaign vote tallies and occur the expense of the Trump campaign.

People are beginning to wonder how these statistical anomalies keep piling up one after another as the corporate globalist Democrat Media insists the election is over as and there should be no attention given to developments in any contested states.

The public however is growing more and more doubtful. More than half no longer believe Joe Biden won the presidential race.

What happens should Wisconsin be taken off the map in the coming days even before the state conducts a recount?

In addition, the suit filed by the Trump campaign against the State of Pennsylvania is now online insisting that every legal vote not illegal vote be counted.

Grist for the Mill is MSV's rumor column but its success makes it the most popular column in all the Mile Square City. Have a tasty carrot for Horsey? Send it to smartyjones@me.com and be assured your confidentiality is protected with MSV's State of NJ Shield Law protections upheld repeatedly in Hudson County Superior Court.

Posted by SmartyJones at Tuesday, November 10, 2020