Six key battleground states remain contested as a press conference by President Trump's legal team laid out evidence to date in what they described as an "opening statement" similar to court with the promise of far more including a massive application of alleged electronic election fraud.

The Democrats are triggered and don't want any further election inquiry nor discussion as do their corporate media allies and Big Tech who are only pleased to censor anything and everything revelatory.

Here's the electoral map as it currently exists with the six highly contested states: 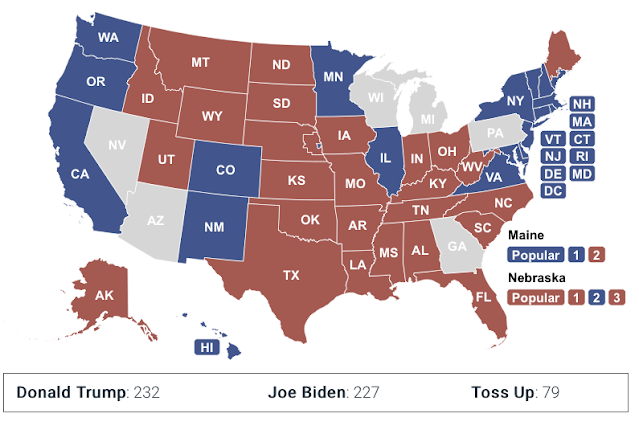 Talking Ed Note: As additional evidence is revealed, it's important for all Americans to apply their own critical thinking to what is fact and what is opinion. Note you get all of the latter and nothing of the former.
Watch, think and see what develops. Refuse to allow others to tell you what to think devoid of fact on what is the actual evidence presented to date and forthcoming.
Note who doesn't want you to delve there nor anything remotely surrounding election integrity.
Listen. Watch. Share.
Posted by SmartyJones at Friday, November 20, 2020