In a surprising development, the vote anticipated tonight by a Special City Council meeting on the controversial Rail Yard redevelopment will not take place after all.

According to an email released earlier today, Councilman Mike DeFusco requested changes to the plan addressing the traffic impact in downtown Hoboken.

He submitted a complaint, however, over the lack of transparency in a holiday weekend notification of the pending vote by Mayor Ravi Bhalla noting his administration had done the exact same thing last year.

Public backlash erupted when Ravi Bhalla failed to notify the public of a pending vote on the massive redevelopment before retreating and providing short notice with a public meeting for comment by Hoboken residents. 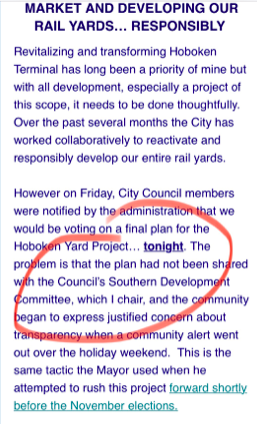 City Council President Jen Giattino reportedly stated a pending date for a vote on the revised redevelopment is scheduled for February 5th.

Our colleague at Hudson County View reported further details the story at the link.