Today the Epoch Times reported comments from the Secretary of Veterans Affairs Robert Wilkie on Wednesday. His comments counter media hit job stories against hydroxychloroquine (HCQ) based on a limited observational study of 368 selected patients.

Media have largely ignored the thousands of others who have used hydroxychloroquine successfully against the Wuhan Coronavirus in an eye-opening display of ulterior motives.

The story quoting the Veterans Affairs Secretary counters the corporate media which have taken that limited observational study and run amok in concerted efforts to slow its usage in the battlefield application saving American lives from New York to Michigan, California and all points in-between. 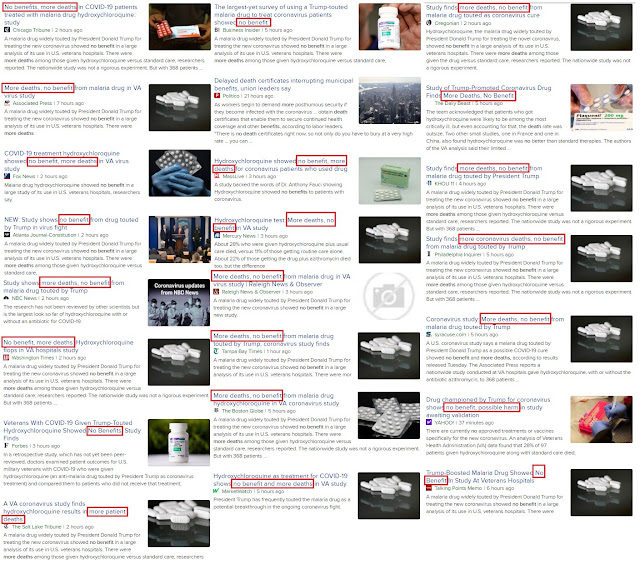 
The anti-malaria drug hydroxychloroquine has been working in COVID-19 patients, Secretary of Veterans Affairs Robert Wilkie said on Wednesday.
Wilkie’s comments come after a study looking at the effects of the drug in 368 patients in Veterans Health Administration hospitals found no evidence the drug is effective against COVID-19, a new disease caused by the CCP (Chinese Communist Party) virus.
Responding to the results during an appearance on MSNBC, Wilkie said, “That’s an observational study. It’s not a clinical study. It was done on a small number of veterans; sadly, those of whom were in the last stages of life, and the drug was given to them.”
The drug “has been working on middle-age and younger veterans,” Wilkie added. By that, he meant that it was “stopping the progression of” COVID-19.
Meanwhile, one physician in Monroe, NY continues to apply his battlefield" HCQ triple therapy coupling the decades old malaria drug with a common inexpensive antibiotic going by the commonly known name Zpac with zinc sulfate.
Dr. Vladimir Zelenko reported his results treating 1450 patients, showing an astounding success rate.

Hospitals in both New Jersey and New York are seeing doctors prescribe hydroxychloroquine with significant success as recounted from those who live after taking the medication.

In Hoboken, one HPD police detective shared on Facebook how HCQ was used after he was taken violently ill by the CCP virus suffering double pneumonia and a running high fever. He claimed the HCQ therapy combined with Zpac saved his life.

In addition, he shared his mom was also struck ill and with her underlying illness putting her at greater risk, she too survived with the same prescribed HCQ therapy.

Posted by SmartyJones at Wednesday, April 22, 2020
Media hit job on HCQ therapy gets pushback from Secretary of Veterans Affairs as Hoboken detective is welcomed back from illness
2020-04-22T16:01:00-04:00
SmartyJones
Comments